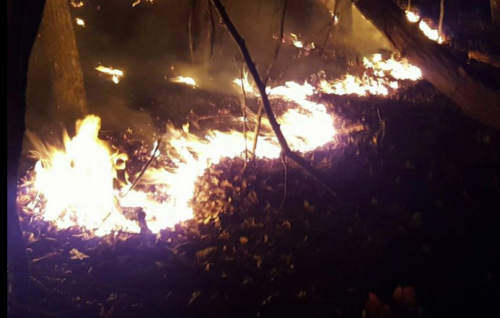 Click above to watch video from Wintergreen Fire & Rescue at the scene.

Earlier original post:
BRL has confirmed several different fire crews are on the scene of a forest fire just off the Blue Ridge Parkway in the general area of the Humpback Rocks Visitor Center.

“We have 2 from Wintergreen Fire, Rockfish Fire has 2, Wilson 2, Dooms 2, and Virginia Department of Forestry. Waynesboro First Aid ambulance has also been dispatched for any medical assistance that might be needed,” Wintergreen Fire Chief Curtis Sheets tells BRL around 6:15 Saturday evening. Chief Sheets also said forestry service has a spotter plane scoping the area and Augusta County has command.

“At least 3 miles separate the fire and the closest Wintergreen Property. Winds are nonexistent. There is no threat to Wintergreen. If this changes, residents will be notified,” Chief Sheets continued.

Additional fire crews were being called to stage at the visitor’s center to assist in battling the blaze. Crews were having to walk into parts of the area to get to the base of the fire below the parkway.