Veteran’s from various branches of service listen as the Nelson County High Marching Band plays during a ceremony held this past Friday – November 11, 2016 in the gymnasium at Rockfish River Elementary School in Afton.

We’ve been telling you about the time honored tradition since this first web story back in 2007. ©™ 2007-2016 Nelson County Life Magazine / Blue Ridge Life Magazine : Photo By Tommy Stafford : Back in November 2007 featured speaker, Captain Jack McNish, (now deceased) Retired U.S. Navy, hands a picture of a submarine to one of the students to show to the audience. McNish told about his time as a commander of the submarine during his time in the Navy. 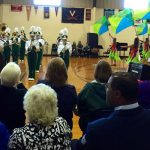 [4]
Students, teachers and veterans listen as the NCHS Marching Band plays honoring veterans this past Friday – November 11, 2016 during the Veteran’s Day remembrance at RRES. 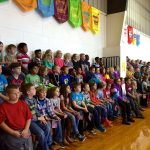 [5]
Students listen as speakers honor veterans this past Friday – November 11, 2016 during the Veteran’s Day remembrance at RRES.

Thank you to veterans past and present for your service!

Click here to look back on past Veteran’s Day events [6] at RRES through the years.