Nelson County, Virginia
Friends of Miss Nelson 2015 – Whitney Loving – learned of her death early Thursday morning in the post below to a prayer page that had been set up shortly after her June 26th car accident. Her parents broke the sad news to the nearly 12,000 followers. 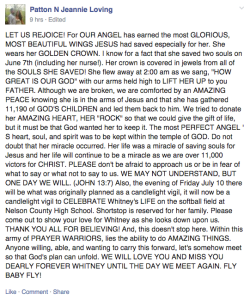 We first told you about the tragic accident in this post on the evening of June 26, 2015 after she wrecked her Jeep on Glade Road in East Nelson County.

“As many of you may now know, our Miss Nelson, Whitney Loving went to be with the Lord this morning. As a county we are…

More above from our media partners over at The Newsplex.

A prayer vigil that was originally set up before Whitney’s death on Thursday will be held at scheduled on Friday night July 10th at 7PM on the track at Nelson County High. The event will pay tribute to Whitney and also help raise money to offset the costs of expenses associated with her hospitalization.

Our thoughts and prayers continue to be with the Loving family.