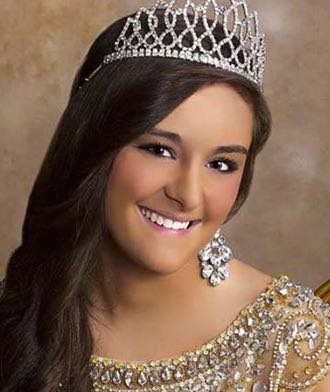 Here is the official press release from the Virginia State Police regarding the accident:

On Friday, June 26, 2015, Virginia State Police responded to a single vehicle crash in the 1800 block of Glade Road in Nelson County. Trooper W.C. Fugate was notified of the incident at approximately 4:03 p.m.

A 1998 Jeep was traveling west on Glade Road when the vehicle ran off the right side of the road. The driver overcorrected, lost control and struck a tree. The impact of the crash caused the vehicle to overturn.

The 16 year-old female driver was transported by ambulance to UVA Medical Center. The driver was the only occupant in the vehicle.

Original post from June 26, 2015 at 8:35 PM
Sad news this evening as Whitney Loving – Miss Nelson County has been involved a serious auto crash on Glade Road in Eastern Nelson. According to a post on the Charlottesville Dogwood Festival Facebook page she was in brain surgery at UVA around 7:30 PM this Friday night.

BRLM has learned it was a serious crash on Glade Road of Eastern Nelson just after 4PM.

Our prayers and thoughts with Whitney and her family during this difficult time.