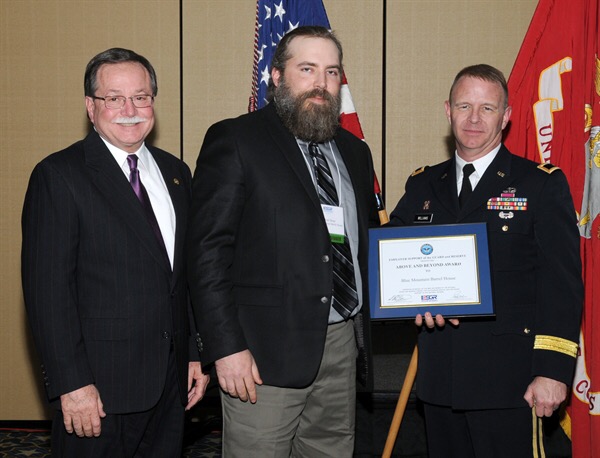 The Virginia Employer Support of the Guard and Reserve, a Department of Defense office, has honored Blue Mountain Barrel House with the Above and Beyond award. The award recognizes employers at the local level who have gone above and beyond the legal requirements of the Uniformed Services Employment and Reemployment Rights Act by providing their Guard and Reserve employees with additional, non-mandated benefits. Blue Mountain Barrel House Head Brewer, Chad Dean, accepted the award from Virginia ESGR State Chair Steve Villalpando in a recognition ceremony on March 28, 2015 at the Crowne Plaza Hampton-Marina. (photo attached)

“The ESGR Above and Beyond Award was created by ESGR to publicly recognize American employers providing extraordinary patriotic support and cooperation to their employees, who like the citizen warriors before them, have answered their nation’s call to serve, Villalpando said. “Supportive employers are critical to maintaining the strength and readiness of the nation’s Guard and Reserve units.”

Blue Mountain Barrel House was nominated for the award by Parker Hobbs who has been part of the Blue Mountain family since 2007. According to Parker, “Taylor and Chad have been extremely flexible with my training schedule, which generally takes up a four day weekend (once a month), two weeks in the summer, schools, and so far a one year deployment, and on top of this, they still give me two weeks of vacation! They have never once complained about my military occupation, but instead have been nothing but supportive and encouraging. I am well aware that my military career puts Blue Mountain Barrel House in a jam from time to time and wanted to express my thanks and gratitude to them.”

The Barrel House team is honored that Parker nominated them for the award. “Parker and his wife have been part of the Blue Mountain family since we opened in 2007, and we’ve been lucky to have him always come back to us. Our production brewery employees three veterans, and I’m always happy to have the highly developed level of skill and dedication that comes from our people who have served. Chad and I are humbled to have been nominated and to receive this recognition.” said Taylor Smack, Owner of Blue Mountain Barrel House.

Blue Mountain Barrel House, located in Southern Nelson County (Arrington, VA), is the sister brewery to Blue Mountain Brewery in Afton. Barrel House has a 14,000 barrel capacity and brews & packages the full line of Blue Mountain beers. They also brew the Barrel House Series which is available on draft and in corked bottles around the state and across the mid-Atlantic.

For more details on the award, please visit these sources: