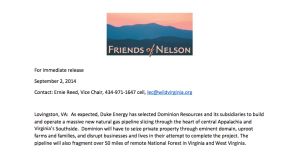 “As expected, Duke Energy has selected Dominion Resources and its subsidiaries to build
and operate a massive new natural gas pipeline slicing through the heart of central Appalachia and
Virginia’s Southside. Dominion will have to seize private property through eminent domain, uproot
farms and families, and disrupt businesses and lives in their attempt to complete the project. The
pipeline will also fragment over 50 miles of remote National Forest in Virginia and West Virginia.

Ernie Reed, Vice Chair of the group stated, “This is a long process and the pipeline cannot be built
without approval from the Federal Energy Regulatory Commission (FERC). We, along with our partners
in the counties along the route, intend to fight the pipeline until the project is dead. This pipeline is not
in the public interest. It is purely a speculative venture to profit from the massive increase in natural gas
supplies due to highly controversial hydraulic fracturing or ‘fracking.’”

He continued, “Friends of Nelson grows every day with new landowners calling us wanting help
protecting their private property from Dominion’s trespassing surveyors and threat of eminent domain.”

A 2004 law, passed by the General Assembly and signed by then-Governor Mark Warner, allowed gas
companies to trespass without permission in order to survey for new pipelines. Virginia is one of a
handful of states that allows such trampling of private property rights. According to Virginia Public
Access Project, Dominion Resources is the largest non-party donor to elected officials in Virginia.

Kathy Versluys, a small business owner in the path of the proposed pipeline, stated, “We were pleased
to see that Augusta County Board of Supervisors passed a resolution requesting Attorney General Mark
Herring review the constitutionality of the 2004 law. Given Dominion’s stranglehold on elected officials
in Virginia, we are not holding our breath. We have incorporated and are preparing our legal case.”

Also as expected, Governor McAuliffe lent his backing to the project. Vice Chair Reed stated, “We were
surprised that the Governor came out so early in support of a project that has not undergone any review
for its impact on the people and natural resources of Virginia. It seems he has been negotiating,
perhaps secretly, with the big corporations, but he certainly has never contacted the people in Nelson
County whose lives have been upended by this proposal. We expected more from Governor McAuliffe.

Reed continued, “It is shortsighted of the Governor to support this venture given the tremendous and
permanent impact it will have on the families, farms and forests in its path. Thousands of Virginia
families and businesses will be negatively impacted by this proposed pipeline. If Governor McAuliffe
wants to create jobs he should invest in efficiency and renewables, the fastest growing sectors in the
energy industry, not the polluting, carbon-intensive fossil fuel industry.”

Friends of Nelson is a citizen-run, community-based, membership organization dedicated to the
protection of property rights, property values, rural heritage and the environment for all the citizens of
Nelson County, Virginia.

Additional Background material:
The pipeline would go through fifty miles of the most sensitive areas of the Monongahela and George
Washington National Forests. It would also cross the Blue Ridge Parkway and the Appalachian Trail–two
of Virginia’s national treasures known for their one of a kind views and beautiful natural forests.
The newly-named Atlantic Coast Pipeline would also disturb the headwaters of major watersheds that
provide high quality drinking water for much of Virginia and the District of Columbia. Augusta, Nelson
and Highland Counties are the headwaters for the Chesapeake Bay and for millions of water users. Most
of our counties’ residents rely on mountain forest headwaters or wells for their drinking water. The
pipeline would cross almost four hundred streams in Virginia and destroy the riparian buffers and
wetlands that protect them. The Shenandoah, Rockfish and James River watersheds would suffer from
heavy sedimentation caused by pipeline construction.
The pipeline would have to be constructed in severely challenging mountainous terrain and through
unstable karst formations that dominate the topography of Highland and Augusta Counties. Karst is
characterized by sinkholes and sinking streams that greatly increase construction and operational safety
concerns. In addition, these counties are known for “orthographic lifting,” the weather phenomenon
that causes tropical storms to stall over the mountains and dump extraordinary amounts of rain on the
mountains in a few hours resulting in mountains sliding away and tiny streams turning into raging
torrents.
In August, 1969, Nelson County was struck by disastrous flooding caused by Hurricane Camille. Camille
dumped 27 inches of rain, mainly within a three-hour period. 153 people were killed and over 133
bridges were washed out. Along Davis Creek, which the pipeline is proposed to cross, 52 people were
killed or could not be found and only 3 of 35 homes were left standing after the floodwaters receded.
This is not an area where anyone should want to build a pipeline.
We are small rural counties, whose economies depend on our rural heritage including our forested
landscapes, farmlands and mountain vistas remaining free of invasive infrastructure or clear-cut swaths.
Our main businesses of low-impact tourism and agriculture rely on our high quality drinking water,
unfragmented grazing areas, fertile, undisturbed soils, and priceless viewsheds. This project threatens
the economic viability of some of Virginia’s most productive farms, many of which have been in the
same family since the 1700s.”