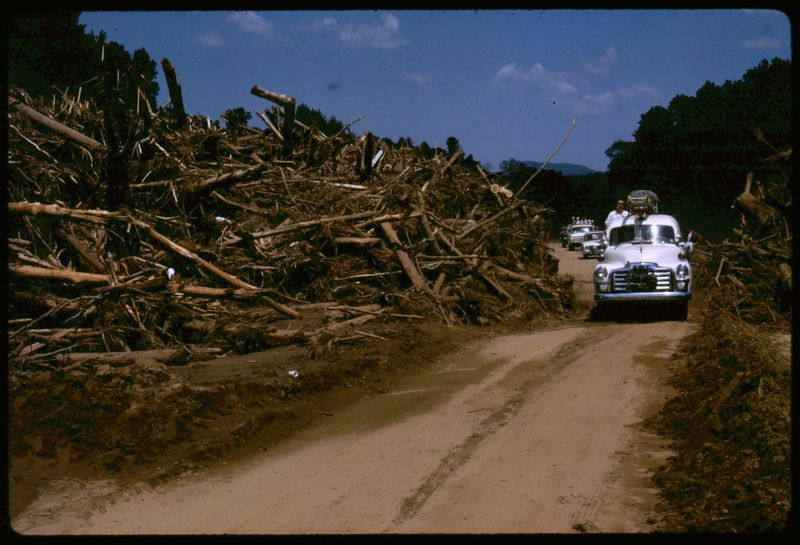 Nelson County, Virginia – August 1969 – Above Photographer Brower York takes a look back at Camille in these rare color photographs from our then Nelson County Life Magazine – September 2008 Click on magazine cover above to view the story and photos.

The program will feature stories of rescue and recovery told by people who lived through the event, which occurred on Aug. 18-19, 1969, and took the lives of 125 people while devastating parts of the county. There is no charge for the program or for entry to the museum, though donations will be appreciated.

Participants include Stephen New of Richmond, who will tell about camping at Crabtree Falls as Camille approached and his terrifying journey to U.S. 29 at Woods Mill where he was helped by the late Curtis Matthews to escape the storm’s wrath.

A round-table of Lovingston residents at the time of the flood, including Al and Johnny Ponton, Billy Hill and Bar Delk, will speak about what they experienced as a landslide of mud and water swept through the village. They will also discuss the rescue and recovery effort. Tessie Kilmartin Lamb, a Lovingston teenager at the time of Camille, will describe her experience the night of the flood and show a scrapbook she kept devoted to Camille and its aftermath.

Glenn and Ellen Birch will sing a song they wrote about Camille, and Mary Buford Hitz will be on hand to sign copies of her novel “Riding to Camille,” a fictional account that centers on the event. The book will be available for sale.

More than 100 color slides of several areas of the county taken by the late Helen G. Quinn of Piney River in the days right after the flood that have never been shown publicly will also be presented.

Oakland Museum, next door to the church, is the home of the Hurricane Camille Resource Center, which includes an exhibit and hundreds of digitized files of photos, videos, news and magazine articles as well as several scrapbooks kept by county residents. The museum will open at 10 a.m.