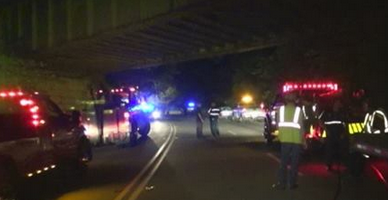 As of 7:30 PM Thursday evening multiple law and rescue agencies are on the scene of a major auto accident on Route 250 at Little Rock Lane in Afton, Virginia. Reports indicate a semi truck and a van collided. The accident is described as very serious.

Route 250 has been closed in both directions where the accident happened near the Albemarle / Nelson Line. Traffic is being rerouted around the accident scene by way of Route 6 Afton Mountain Road.

Diane Givens told us via Facebook, “Backed up to the 64 exit top of Afton Mtn.” Numerous other motorists report similar traffic problems in the area around 7:30 PM Thursday evening.

An alternate traffic route is highly recommended if you are traveling in the area.

The road is expected to be shutdown for much of the evening.