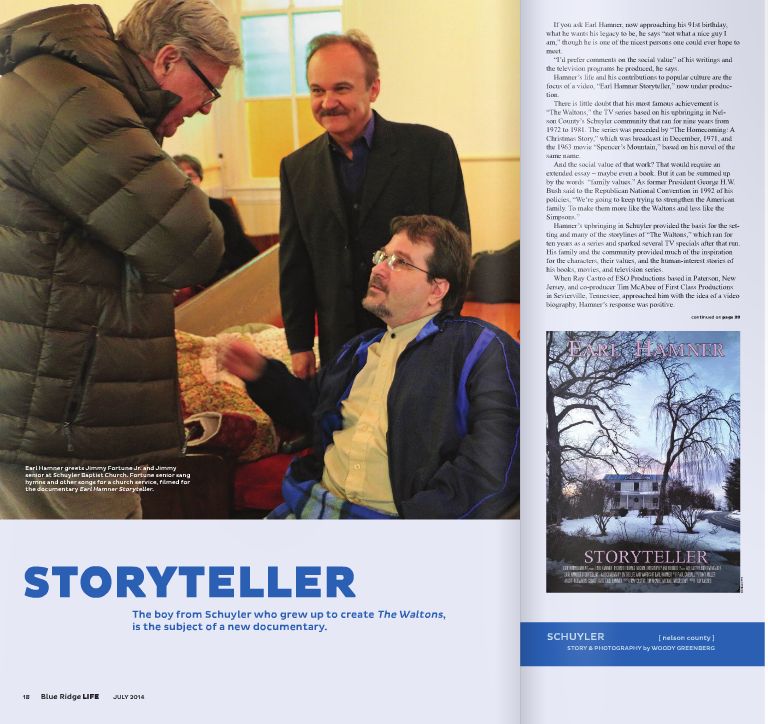 Click on the magazine image above to read Woody Greenberg’s story on Earl turning 91 in our July 2014 issue.

Schuyler
Nelson County, Virginia
By Tommy Stafford
Almost 10 years ago I had the distinct honor and privilege of meeting one of the nicest people on this planet. Earl Hamner, Jr. At the time a theater was being established in his name back here in Afton. I was floored when he personally returned my phone call from his cell while he was out shopping for groceries. He was a young early 80’s man back then! Since that first meeting we have become friends, shared stories of Nelson and talk on occasion. He takes BRLM by mail each month and will leave a message on our voice mail every now and then, remarking about how beautiful this county still is decades after his leaving and eventually settling in California. In the early years of our then Nelson County Life Magazine, Earl wrote a regular column.

Earl was born in Nelson County way back on July 10th, 1923. Up until recently he still drove to the grocery out in California, and he still keeps a pretty busy schedule writing and making occasional appearances. Though he admits, much slower these days!

In the near future a documentary will be released on his life, Storyteller. He was back in Nelson in the spring of 2014 while crews shot in his hometown of Schuyler.

We are honored and humbled to know Earl on a personal level. We never tire of hearing his stories and on this his 91st birthday, we wish him, his family and all that have followed him throughout his entire career the best!

Happy 91st Earl from all of us back here in Nelson County, Virginia!