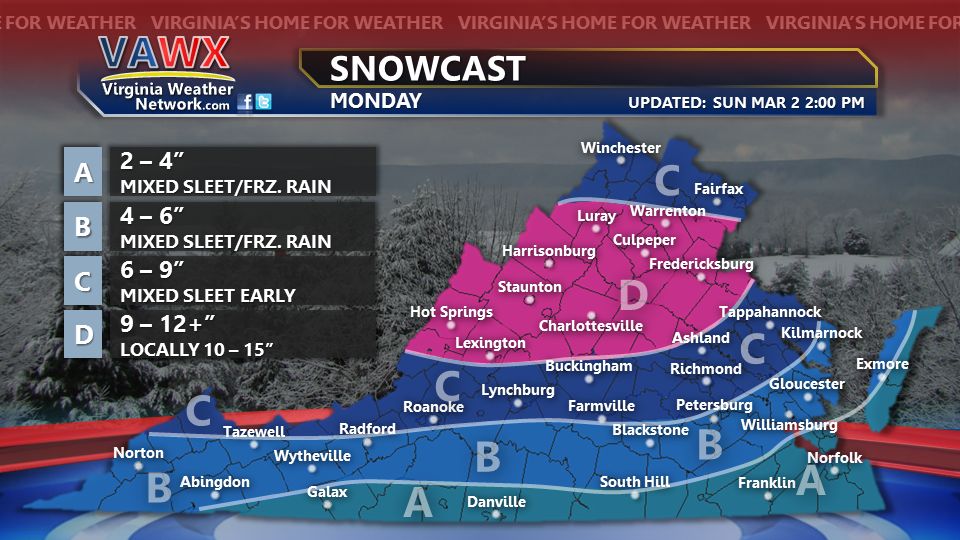 Richmond and Central Virginia has made it up to 70 degrees in spots this afternoon. I hope you enjoyed today, because you will be freezing tomorrow.

A cold front will cross the area Late Sunday and into the early morning hours on Sunday… with low pressure riding along the front. The gradient of very warm to very cold will likely spark a real intense burst of precipitation during the day Monday.

One of the biggest concerns will be a FLASH FREEZE. That’s when rain comes ahead of the frontal system and then temperatures drop rapidly below freezing as the colder air moves into the area. This will create chaos on the roadways. Rain would then changeover to sleet and freezing rain. This is a MAJOR concern over Central and Southern Virginia early Monday morning.

We have bumped snow totals up across Southern Virginia and Hampton roads from 1 to 3 inches, now 2 to 4 inches. Colder air seems to be working in a bit faster on the latest model data, so the changeover to sleet could even happen before Noon across the Southern counties. It will likely be rain around sunrise, but by mid-morning its sleet and freezing rain, then snow in the afternoon.

Tri-Cities is now in 4 to 6 inches of snow accumulation. Rain to freezing rain during the morning commute to sleet. Snow, heavy at times in the afternoon.

The most significant change in this forecast is an area of 6 to 9 inches that extends from Roanoke, Lynchburg, Farmville and right into Central Virginia. The transition from rain to sleet and freezing rain could happen BEFORE Sunrise Monday morning and then SNOW before the Noon hour, with several hours of moderate to heavy snow through early evening.

Charlottesville to Fredericksburg areas remain in the highest snow totals, anywhere from 9 to 12 inches. However, there could be locally higher amounts as labeled on the map of more than a foot. This area is expected to see mostly snow. Some sleet and freezing rain before Sunrise, but it will be very brief.

Far Northern Virginia and Washington D.C. has been bumped down a bit, but will still see a respectful amount of snow anywhere from 6 to 9 inches. Locally higher amounts up to 10 will still be possible.

SOIL TEMPERATURES are warmer because of the milder period we’ve been experiencing today, but quickly freezing temperatures will freeze the ground rather quickly for quickly accumulating ice and snow.

SUN ANGLE this time of year is pretty high, compared to October. Even through overcast conditions, you can get the slightest sun peaking through. Normally this HELPS roadways and keeps them wet and not white. However, with the flash freeze conditions and quickly dropping temperatures throughout the day, this will not help at all. The afternoon/evening commute will likely be a nightmare across much of the State. Tuesday’s morning commute will also be nasty as well with low temperatures dropping into the single digits and teens.

Original post from 3.1.14
Another round of winter weather with significant icing and snowfall is shaping up for a large part of Virginia including the Central Virginia Blue Ridge. The most likely time for the messy weather to begin is after midnight Sunday night into Monday.

Our friends at virginiaweathernetwork.com have been studying what the storm will do and the above graphic is their estimate as of 1PM Saturday. I concur and agree this has the potential to be a major storm. Depending on the exact track and where the temps get the coldest early on will depend on the types of precipitation a certain area will see.

Below is VAWX’s analysis as of Saturday afternoon:

UPDATED SNOW FORECAST…. MONDAY
**SIGNIFICANT CHANGES FOR MOST OF THE STATE**

After a very warm day in the 50s and 60s on Sunday, a cold front will cross the area Late Sunday and into the early morning hours on Sunday… with low pressure riding along the front. The gradient of very warm to very cold will likely spark even more precipitation across the area through the day on Monday.

I want to empathize that this is an arctic front with a very arctic airmass. With the snow accumulation, temperatures will be even colder, especially at night. Just to give you an idea… Most models have temperatures dropping to near ZERO Tuesday Morning across Richmond with many negative numbers North and West. We are talking about a 50+ degree difference in 24 hours.

When it starts snowing hard and temps are below freezing, the snow will stick almost on contact. Even with this mini period of warm temperatures, it will not reduce accumulations at all due to the very cold airmass moving into the area. The colder temperatures working in throughout the day will create higher snow ratios, providing dry, fluffy snow.

There will still be some mixing issues, especially in zones A and B.

Across Southern Virginia and Hampton Roads, these areas will be the last to see a changeover to all snow. Even the 1-3 could be a bit on the conservative side. It will all depend on how much rain falls first, which could create more of a “slush” over wet ground and not accumulate right away.

Across Tri-Cities, it will start as rain early Morning morning, but go over to a mix of freezing rain and sleet for several hours, then snow with snow accumulating quickly through the afternoon.

Richmond Area will see less mixing, probably sleet with MAYBE freezing rain at the onset, but this will probably be mostly sleet and snow, becoming all snow later in the morning and continuing into the afternoon.

Charlottesville to Fredericksburg and points North into Washington Metro will be a mess. It will start as snow and stay snow through the entire event. With temperatures starting on the very cold side and remaining that way, snow ratios will be very high. Locally higher amounts more than a foot would not be surprising at all.

Sun angle needs to be addressed. We are into March now. The sun angle is getting higher. Even through overcast conditions, you can get the slightest sun peaking through. Normally this HELPS roadways and keeps them wet and not white. At first, it will help… However, with hours of steady moderate to heavy snow, roads will become very slick, snow covered and treacherous…especially going into the afternoon and evening from Richmond and points South. Richmond and points North and West roads will probably become slick in the morning hours because the precipitation starts out as snow in these areas. Temperatures below freezing will cause anything that falls to freeze on the roadways. Tuesday morning commute will probably be really bad for at least 80 percent of the State.

Here is a more “narrow” range of what to expect in your area. Out of the most absolute respect, we do not have time to answer your questions on how much snow. Please try to find your location on the map, or use the following pinpoints below for an estimation for your area. Just pick the nearest City/town….. Also on the snow map, with the ranges, the southern end of each zone you go by the lesser number and the higher number on the most northern end of the zone.