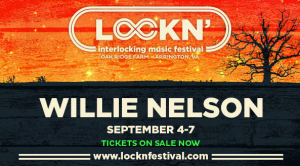 “We are honored to have Willie Nelson at Lockn’ Festival this year! Willie Nelson is an American country music singer-songwriter, as well as an author, poet, actor, philanthropist and activist. Willie Nelson has written more than 2500 songs and released close to 300 albums. He has won numerous awards, including seven Grammy Awards and 12 Country Music Awards, including 2012’s lifetime achievement award. He was inducted into the Country Music Hall of Fame in 1993. He is a 1998 recipient of the Kennedy Center Honors. He is recognized world wide as an American troubadour and icon, as one of the most versatile, enduring, and influential talents in late twentieth-century music. For a detailed look at his accomplishments and influence, both musically and socially, read his bio at the Country Music Hall of Fame.”