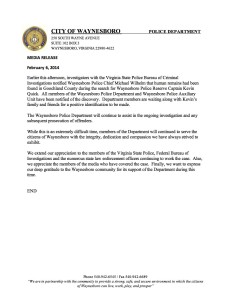 Late Thursday evening the Virginia State Police released the following statement regarding the body being found in Goochland County, VA:

There will be NO press conference or briefings tonight. The body will be transported to the Office of the Medical Examiner in Richmond for examination, autopsy and positive identification. That will take place Friday. I will follow up as soon as positive ID and next of kin is notified.

Earlier in the day BRL spoke with Nelson County Sheriff David Brooks after other media sources had been reporting that sources had been telling them this was Quick. WRIC Richmond, coverage here. Continuing updates from NBC12-Richmond are here. “It’s customary for investigators to have the medical examiner certify positive identification,” Sheriff Brooks added late Thursday night.

Original Story at 4:12 PM on Thursday 2.6.14
Nelson County Sheriff David Brooks confirms to BRL that the body found today in Goochland. is that of missing Waynesboro Police Reservist. “We have teams there that have, sadly, confirmed this is Kevin Quick,” Sheriff Brooks told BRL just after 4PM Thursday.

During the course of various searches being conducted in Louisa and Fluvanna counties today, a body was discovered Thursday (Feb. 6) afternoon in a remote area along on the Fluvanna and Goochland county line. State Police are on scene and in the process of identifying the individual and gathering evidence. Once identification is confirmed and the next of kin notified, we will be able to release the individual’s name to the public.

At this time the investigation into the disappearance Kevin W. Quick, 45, of Rockfish, Va., remains active and ongoing. We are still encouraging the public to come forward with any tips related to his disappearance by calling the Virginia State Police by cell at #77 or at 434-352-7128. A reward of $40,000 has been pledged by the Waynesboro residential and business community for information that leads to his whereabouts.”