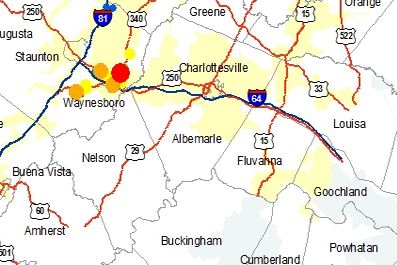 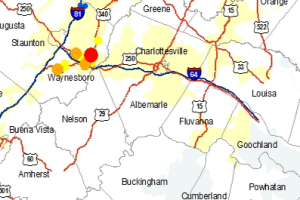 Just before 2PM power began coming back on for portions of the area. But we are getting reports of power still out in Waynesboro and the surrounding area.

Update: 10:05 AM
We just hung up with Dan Genest, media relations from Dominion Power:

“We had a small fire at our Dooms Substation north of Waynesboro in Augusta County. Out 1st and 2nd bus has been affected at the station. This affects roughly 19,000 Dominion Power customers and an additional 13,000 electric cooperative customers as well. Our crews are working to restore the electric bus that was damaged and get power back on. It may be several hours. We are asking that everyone affected, please help us. Turn off all appliances, and all lights except just one. Please turn your heat pumps off. We ask this so that when power is restored the load to our circuits is not overwhelming as we come back online.”

However in this Staunton News Leader Update, Genest also said it could talk longer:
““We are hoping to get things back on some time today,” he added, but he said that was not definite.”

BRL has been trying to reach media relations people with Dominion Power. No one has returned our calls after several attempt. However Nelson County’s Emergency Service Director, Jaime Miller has been able to get some official word from Dominion, “They had a “violent failure”. Crews are on site and said restoration should be in 2-3 hours before they could get the load back to our lines,” Jaime told us late Saturday morning.

A major power outage has hit the area on one of the coldest mornings of the year so far. “This is definitely not a CVEC related problem, though we have thousands of customers affected because our main feeder from Brents Gap north, Dominion Power, is having some sort of issue.” Greg Kelly with CVEC told us early Saturday morning.

“CVEC has more than 6100 members without power due to the Dominion transmission line issue. The following substations are not receiving power from the transmission system: Midway, Martins Store, Laurel Springs, Wintergreen. CVEC is awaiting repairs by Dominion. Members do not need to report an outage since the issue is on the transmission line.”

According to the Dominion website nearly 20,000 people served by their feeder lines are out.

BRL has receiving unconfirmed reports of a transformer fire in Doom and a Crimora substation being down. We are awaiting official confirmation on that.