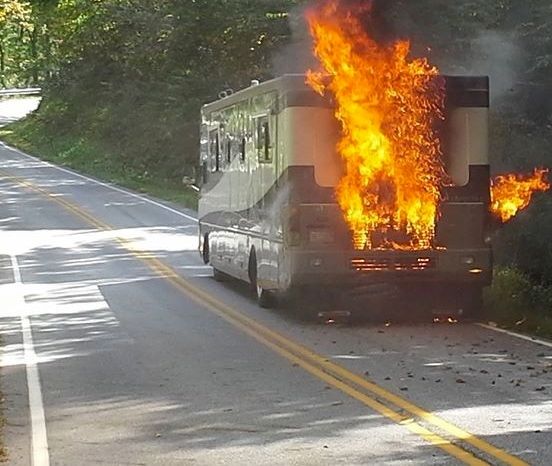 Central Virginia Blue Ridge
Because of cloudiness on Saturday, many folks stayed indoors. But Sunday, with full sunshine, everyone was out traveling the roads. Just after noon Sunday in Nelson County near Montebello, an RV caught fire on Route 56 between Montebello and the Blue Ridge Parkway. No one was hurt in the fire but the RV was pretty much totaled. And, Route 56 was closed down for much of the afternoon while the burned RV was removed. Just after 5PM Sunday the road was reopened for traffic.

Just an hour or later in Augusta County northward on the Blue Ridge Parkway around MP 3.8 a serious motorcycle accident sent patients to Augusta Health in Fishersville. National Park Police are investigating that accident.

Back in Nelson an additional accident in the afternoon around 4:30 PM sent another person to the hospital by helicopter. The single motorcycle accident happened on Route 151 in the vicinity of Brent’s Gap, south of Route 664. The female driver was airlifted from a landing zone in Nellysford. No word on her condition at this point.

Updates when we have them