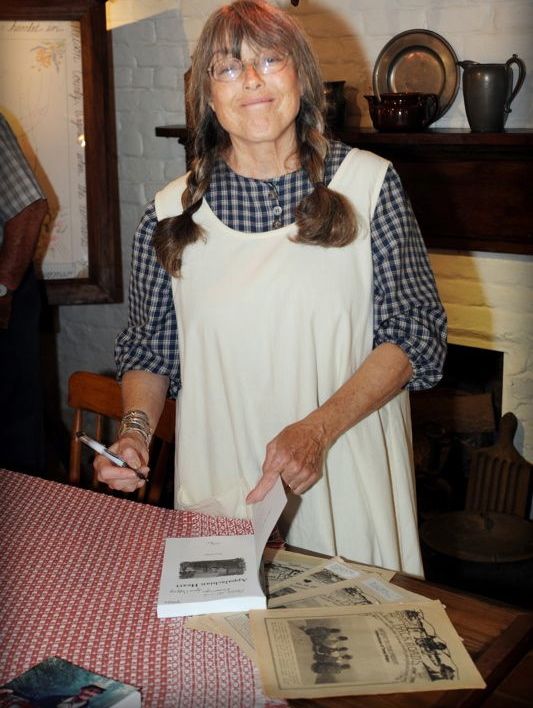 Arrington
Nelson County, VA
Nelson’s Museum of Rural History celebrated National Museum Day this past Saturday – September 28, 2013. For that one day admission was free to the museum highlighting the rich history of Nelson County. BRLM columnist Lynn Coffey was on hand autographing her 4th book recently released, Appalachian Heart. If you haven’t purchased one of these. Do it. All of Lynn’s books are keepsakes if you want to learn about life in the Blue Ridge from long ago.

In 1980, when Lynn Coffey moved to the tiny mountain hamlet of Love, Virginia, she realized the Appalachian culture was slowly ebbing away and somehow needed to be preserved. Without any formal training in journalism, Lynn started a newspaper called “Backroads” and began recording oral histories and taking photographs of her elderly neighbors, publishing their stories in the monthly newspaper. For the next twenty-five years (December 1981-December 2006) Lynn roamed the hills and hollers around Love, writing stories that captured the heart and soul of the Appalachian culture, lending dignity and importance to an oft-overlooked and misunderstood people and their rugged way of life. When Backroads ended, the cry of the mountain folks’ words, “Don’t let our stories die with your retirement,” haunted Lynn so she began compiling many of the articles from the former newspaper, putting them in book form.

Lynn’s first book, Backroads; Plain Folk & Simple Livin’ was published in November of 2009 and was an instant success. One year later, the second volume, Backroads 2; The Road to Chicken Holler came out to the delight of those who enjoyed the first book. The third book in the series, Backroads 3; Faces of Appalachia completes the Backroads trilogy.

Ted is known all across the area. Lynn writes about Ted in her October column in the magazine and our Marcie Gates tells his story in greater detail and pictures on page 38 of the October issue.