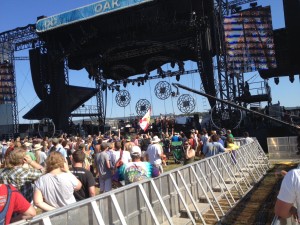 Scroll down for updates from Friday evening

Original story from 9:25 AM
In a telephone conversation with Nelson County Commissioner of Revenue Jean Payne on Friday morning, BRLM has been told that the Lockn’ revenue numbers released are not hers. “I don’t know where those numbers came from, perhaps estimates, but they did not come from me,” Commissioner Payne said.

The Lockn’ press release directly attributed the information to the Nelson Commissioner Of Revenue:

“The Commissioner of the Revenue for Nelson County says early numbers place tax revenue to be received by the County at approximately 1.6 million dollars, with 53% of ticket sales from outside of Virginia.”

“I did not release those numbers” Payne again reinforced to BRLM on the phone Friday morning. Payne said she wanted citizens to know she did not release the information. “Those may be estimates someone has formulated or some sales tax numbers that we don’t handle, but we won’t have completed tax revenue until October 20th. That’s the deadline for that information,” Commissioner Payne continued.

At 12:40 PM on Friday we emailed Olivia Branch the regional public relations person with Lockn’. We discussed our conversation with Commissioner Payne and asked specifically how Lockn’ arrived at those numbers. Ms. Branch told us she was worked with Nelson Economic Development Department on the numbers and was trying to obtain clarifications and would get back to us shortly.  As of 6: 15 PM Friday Ms. Branch with Lockn’ had not followed up. However, our media partners at CBS-19 in Charlottesville did snag an interview with Dave Frey, one of the main Lockn’ organizers. “We got that number from a county official,” said Lockn’ organizer Dave Frey, but he declined to be more specific. “We are not experts at estimating tax revenue. So we wouldn’t really offer a number like that without getting it from someone else,” he told CBS-19 in their story linked here.

6:30PM – UPDATE: Just after we updated this story at 6:15 PM  Friday evening, Dave Frey with Lockn’ called our office. “You had a question for Olivia with our staff,” he said. When asked about the discrepancy of the numbers and the attribution to the Nelson Commissioner of Revenue he said his information came from the Nelson Economic Development Director, Maureen Kelley.

As stated in the Lockn release, early indication of the $1.6 million regional impact estimate is based on expected tax revenues. For Nelson County – 1% will be received from state sales tax, 5% from lodging taxes, 4% from food and beverage taxes, as well as employment taxes and various other sources. What is also included is revenue generated from an local multiplier effect – for every dollar spent locally, that dollar recycles back through the economy five more times.

In another interview with The Roanoke Times Frey said he hasn’t even decided if they will come back to Nelson in 2014, saying the festival lost money during the inaugural event in Arrington.