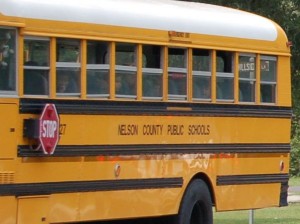 FROM: ANTHONY MARTIN, COMMONWEALTH’S ATTORNEY ROGER COLLINS, NELSON COUNTY PUBLIC SCHOOLS
CONTACT: 434-263-7010
A 17 year old female has been charged with making a bomb threat after an investigation by the Nelson County Sheriff’s Office.
On May 28, 2013, Nelson County Sheriff’s deputies along with other law enforcement agencies responded to the high school after school officials found the threat which was written on a bathroom door inside one of the class rooms.
The arrest was made after several students including the suspect were interviewed.
“The school administration takes all school threats seriously. Any individual making a safety related threat will be dealt with in a firm and consistent manner including expulsion from school,” said Roger Collins, Superintendent of Nelson County Public Schools.
A written threat to burn or bomb a building is a felony under Virginia law and carries up to 10 years in prison for adults. The juvenile was released to the custody of her mother pending a trial scheduled for October.