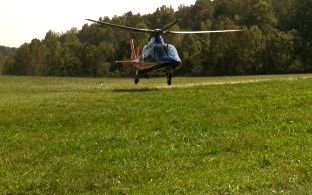 Faber
Nelson County, VA
Rescue crews from Wintergreen, Rockfish Valley, and Faber responded to a Wednesday afternoon call to help free a man who was caught in a hay baler. “We think his baler slipped some sort of belt, causing it to heat up,” Wintergreen Fire Chief Curtis Sheets told NCL. That set three separate large bales of hay on fire in the field creating large amounts of smoke seen as far away as Woods Mill according to one witness who emailed NCL via Facebook. “It was very hard to get equipment and gear into the scene due to a very small passage for fire engines to get in,” Nelson Emergency Services Director Jaime Miller added.

According to Chief Sheets it’s believed the man attempted to work on the hay baler after discovering a problem. That’s when he became caught in the piece of farm equipment. “It took crews about an hour to free the man. He was never in danger of the burning bales of hay. They were off in the field, but were left to burn temporarily as the man was freed from the baler. Squads couldn’t get enough equipment into the scene to fight the fire and free the man at the same time,” Chief Sheets continued.

After being freed from the baler, crews extinguished the burning bales of hay. The injured man was flown to UVA Medical Center. Injuries are not thought to be life threatening.