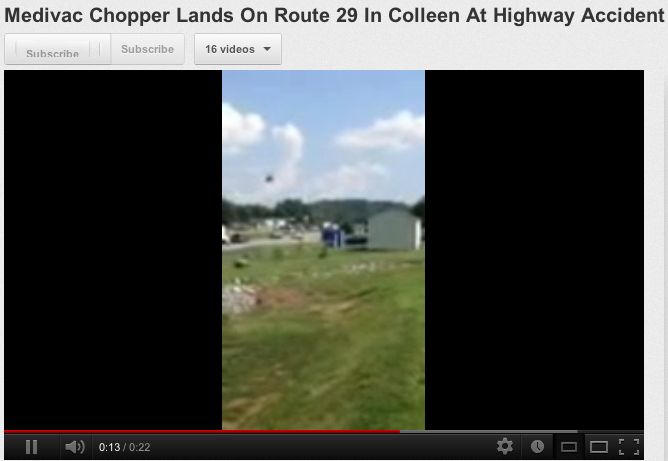 Video Courtesy of Brian Mininger: An AirCare5 Chopper lands on Route 29 in Colleen Friday afternoon to transport the injured after an auto crash in the southbound lane.

Colleen / Lovingston
Nelson County. VA
It’s been a busy Friday for police and rescue personell in Nelson County. An accident on Route 29 southbound in Colleen between the BP and the Exxon brought traffic on that side to a standstill for a lengthy time. An AirCare5 medical helicopter landed at the scene and transported one person. Another was transported by conventional ambulance.

While the accident was underway in Colleen, another accident happened just north of Lovingston near St, Mary’s Catholic Church, also on the southbound side. A person on that accident was partially thrown from the car. A medical Pegasus helicopter transported the person from this accident after landing at the Nelson Wayside on Route 29.

We have no exact details on these accidents as of mid-afternoon Friday.

As of 2:15 PM traffic was flowing normally along Route 29 according to several people traveling that highway.