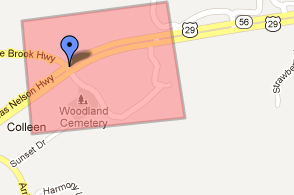 View Area where auto fatality occurred 56 & 29 in a larger map
Area above in Colleen at the intersection of Route 56W (Tye Brook Highway) and Route 29 where a person was killed in a Monday afternoon 3 car auto accident.

Colleen
Nelson County, VA
Our media partner over at The Newsplex CBS-19 picks up the story in this information from their website on Tuesday:

April 3, 2012
According to a statement from Virginia State Police, a Nelson County woman died Monday afternoon following a two-car crash at the intersection of Route 29 and Route 56.

The crash happened around 3:40 p.m. Authorities say a 2000 Toyota Camry was making a left turn from Rt. 56 onto Rt. 29 when it cut off a 2007 Ford Focus. The Focus was traveling south on Route 29 and was unable to avoid the Camry, crashing into the driver’s side of the car.

The driver of the Camry, 83-year-old Joan W. DeMasters, of Roseland, died at the scene. She was wearing a seat belt. Her husband and passenger was taken to the University of Virginia Medical Center with non-life threatening injuries.

The driver of the Focus, 33-year-old Antwan S. Rose, of Madison Heights, was not injured in the crash. He also was wearing a seat belt.

Police say no charges will be filed in the crash.

Original Post from 4.2.12
One person lost their live Monday afternoon after a major three car crash at the intersection of Tye Brook Highway (Route 56W) and US 29 in Colleen. “Sadly, there is one fatality from the crash,” Nelson County Sheriff David Brooks confirmed Monday afternoon.

The deceased person’s name is being withheld until all family has been notified.