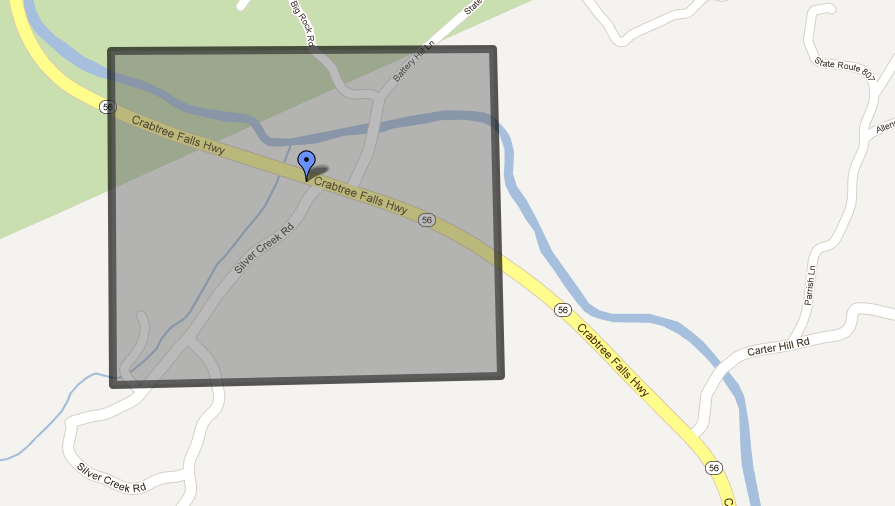 View General Area Where Nelson Pursuit Ended in a larger map
Above is the general area where the pursuit ended after deputies chased a suspect at speeds exceeding 90 MPH in the Massies Mill / Tyro area.

Updated 5:00AM EST 12.30.11
Nelson Sheriff Brooks says his agency has identified who the man is that fled from officers late Thursday night. “We know who is. Danny Acord is being charged with felony eluding of a police, 2 counts of felony damage to police property, and 2 charges of felony assault & battery on a police officer. There may be other charges forthcoming,”

Officers called off the search late Thursday night when Accord fled into the mountains where the pursuit ended. A female passenger in the car was not hurt and did not flee the scene.

Updated 10:55PM EST 12.29.11
Eyewitnesses on the scene tell us the female passenger in the pursued vehicle is with police and is safe. It is unclear at this time what if any part she played in the pursuit.

Original post from 10:37 PM EST
Nelson County Sheriff David Brooks confirms to NCL Thursday night that deputies are looking for a man that lead deputies on a high speed chase earlier in the evening. “The man bailed out of his vehicle on a road leading up the mountain off of Silver Creek Road in the Tyro area,” Sheriff Brooks said. Deputies began their pursuit earlier in the night along 151 in the Roseland area but the pursuit took a turn up Route 56 toward Crabtree Falls. At times the suspect hit police cruisers causing damage to the cars. The active pursuit ended when a deputy’s car became disabled during the pursuit.

It is believed as of late Thursday night the male driving the car bailed out of what’s described as a red SUV in the Silver Creek Orchard area. Another female passenger was believed to be in the vehicle but did not flee from officers.

As of this post Sheriff Brooks was making the scene and deputies were setting up a general perimeter.

Cell service is very spotty in that area so updates may be infrequent, we will have a complete detailed update in Friday morning.