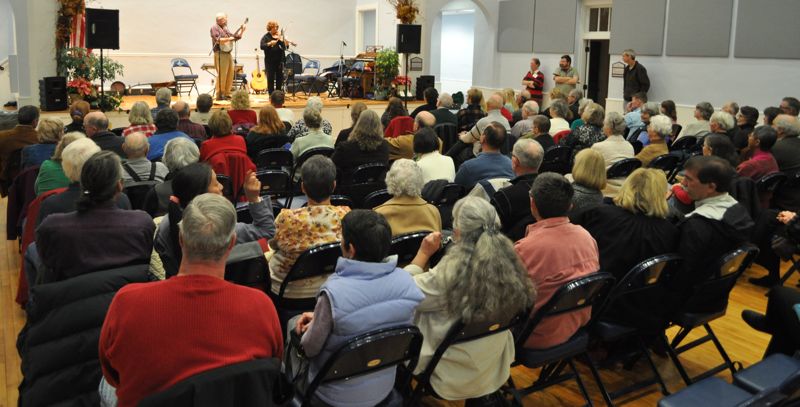 Where does our music come from?

In the case of Nelson County, the traditional music – played on fiddles, banjos, guitars, dulcimers, harmonicas– and variously called “old-time,” “bluegrass” and, later, “country,” was a melange derived from various European and African influences – English ballads, Irish and Scottish fiddle music, religious hymns and African-American blues. But it is music that was brought here by people, and one of the groups with the greatest influence on its evolution were the Irish who came here in the 1840s and 50s to escape the great potato famine and English rule and, in the process, built our railroads, tunnels, turnpikes and canals.

Clann Mhór, Gaelic for “The Great Family,” is a local organization devoted to researching and preserving the contributions of Irish immigrants to this region, and its focus of late has been on the workers who built the Afton Railroad Tunnel, engineered by Claudius Crozet.

The King Golden Banshee Band plays a variety of traditional Irish music on guitars, fiddles, tinwhistles, flutes, banjos and bodhráns (a framed drum descended from old Irish war drums). Songs such as “Danny Boy,” “Old Apples in Winter,” and “The Lakes of Pontchartrain” tell stories that come down from the old country. Irish dancers also performed, as well as local folk musicians Kim and Jimbo Cary.

Donleavy says Cecil Sharp, an English music teacher who became interested in doing field work on folk songs that had crossed the Atlantic with the Irish, Scottish and English who came to America, came to Nelson County in 1918 and interviewed Fannie and Alex Coffey in White Rock, Philander Fitzgerald in Afton, Dol Small in Nellysford and Maria Tomes, an 85-year-old former slave of the Coleman family in the Rockfish Valley area. Sharp annotated the notes of the songs he heard while his secretary, Maud Karpeles, took down the words.

Later, in 1950, Karpeles returned to Nelson and recorded songs sung by Florence and Napoleon Fitzgerald, descendants of Philander Fitzgerald. Donleavy believes that their songs may have come from the Irish railroad workers who worked on the Afton Railroad Tunnel in the 1850s.

Proceeds went to Clann Mhór and the Nelson Music Project of Oakland Museum.