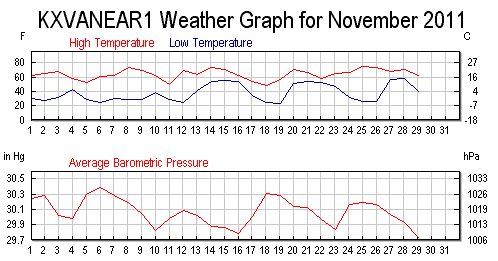 Nelson County, Virginia
If it seemed warm for many days in November, it was! As we head into the first of December it feels more seasonal, but for lots of November it felt like spring. Here at NCL in the Rockfish Valley we reached a monthly high of 75° in November 25th, with the lowest reading that month of 24° on November the 6th. For the month we recorded 2.97″ of rain and for the year make that just under 40 inches at 39.17″. We had a trace of snow for November 2011.

Head up in altitude to our NCL-TWNF Weathernet station at The Wintergreen Nature Foundation 3500′ feet above and the numbers are a bit different, but still warm for many days in November. They reached a high of 70° on November 7th and a low of 21° for the month on November 17th. For the month they had 5.5″ of rain in the gauge and just under 51″ of rain at 50.85″ ending November 30, 2011. During November they picked up about 3 inches of snow to boot!

Though it was warm lots of November, it wasn’t unprecedented.

December starts cooler, but not ultra cold. By the upcoming weekend, relatively mild temps with mostly sunny skies will settle back over Nelson before rain moves back in for the first of next week.