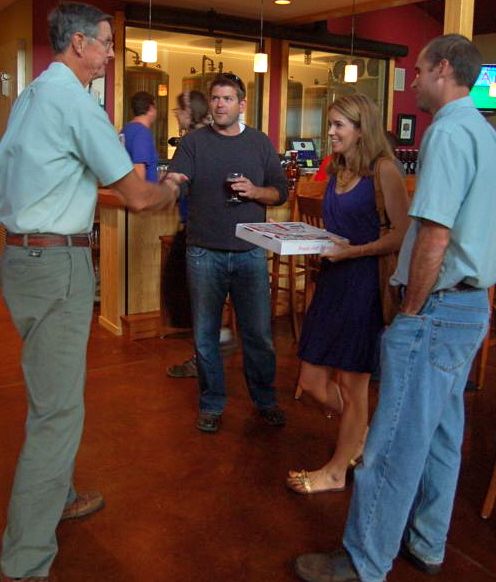 Afton
Nelson County, Virginia
In a matter of hours Blue Mountain Brewery in Afton, Virginia doubled in size! Though it took months and months of construction to get to that point. Earlier this week the crew at BMB had a couple of soft openings to give everything a dry run before opening to the public today. (Wednesday 9.14.11) We first told you about the expansion back in February of this year.

Blue Mountain was Nelson County’s first microbrewery, opening back in October of 2007.

The previous restaurant & patio have been converted into The Blue Mountain Beer Hall, which is available for private events such as rehearsal dinners, birthday parties, and corporate dinners. “In the past we had many inquiries about hosting parties at Blue the brewery but we just didn’t have the space. Now we can accommodate up to 65 guests for an indoor private event and even more when the outdoor patio is used. It’s already been very popular and we are booking all kinds of events for the rest of 2011 and into 2012” said Jessica Bullard, Event Coordinator for Blue Mountain Brewery.

The food and service were absolutely fantastic! The menu has been expanded with lots of new additions!

In addition to the new pub / restaurant expansion Blue Mountain is about to break ground on their commercial production facility here in Nelson County. You can read more about that project by clicking here.

The official Grand Opening of the restaurant & brew pub expansion is set for Wednesday, September 21st from 5-9pm and will feature live music, the new menu, specials & more. But you don’t have to wait until then to experience it. Drop on by!