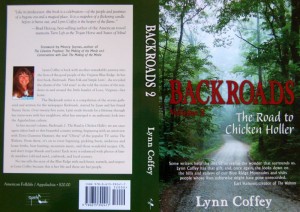 Lynn founded Backroads Newspaper or Magazine, as some call it, way back in 1981. 25 years later the final edition of the publication went out in December 2006.

We told you about Lynn’s debut book about a year ago in our December 2010 issue of Nelson County Life Magazine shown above. Page 15.

Lynn will be holding several Backroads 2 area book signings in the coming weeks including:

Congrats Lynn on another great book!