While heading back to Afton Thursday afternoon, I couldn’t help noticing some way up there in the sky out in front of Basic Necessities Wine & Cheese Shop in Nellysford. Up there! It’s who? Jim Purvis! We first did a story on Jim back in the early days of our printed magazine edition. Back then we were talking about his extreme artistic talent. He loves sketching Nascar scenes! 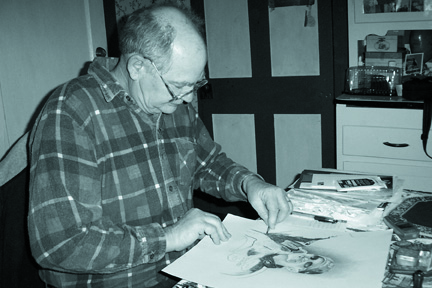 But it’s what he was doing Thursday that really had our attention. I stopped and asked Jim what the pretty good sized solar panel was all about above the Basic Necessities sign. “They are going solar,” Jim said. Well, not exactly. The lighted sign out front is. Over the past several years delivery trucks pulling into the parking lot have torn down the wire leading to the original lighted sign. So…they’ve eliminated the wires, and the expense of running the lights at night! Smart!

And if you stand around long enough, news will find you. It did again Thursday afternoon in the very same spot. While I was talking to Jim, “FP” Phillips, owner of Valleymont Market pulled up. That’s him in the photo below. 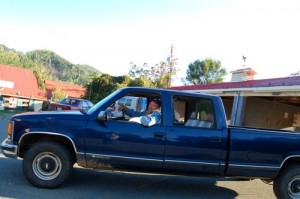 I’d been hearing rumors for weeks that FP was tossing in the towel as far as running Valleymont, and he confirmed it for me Thursday. Today the longtime grocery which started as a fruit stand back in the mid 70’s, will transfer to his father-in-law, Paul Koschara, will start running the gourmet market. That would be Katie’s dad. A little known fact is that FP is almost a registered nurse, but never finished his schooling as kids came along and life got busier. FP is now headed back to class to finish up what he started years ago. He tells me he and Paul struck a deal that would allow him to go back to class and Paul, with possibly Katie once again running the “iconic” grocery.