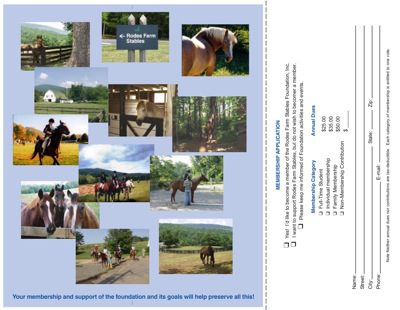 As NCL has been reporting, Rodes Farms Stables in Nellysford was slated for closure earlier this year due to budgetary concerns. However, after a meeting with local members and area residents, both Wintergreen and a new group called, Rodes Farm Stables Foundation, Inc are working in unison to hammer out a resolution to keep the stables open.

NCL was sent the following information below by the new group outlining what has taken place thus far. If you are interested in a membership in the newly formed organization, you can print out a form by clicking on the image above.

According to documents filed with the Virginia State Corporation Commission, the purpose of the Rodes Farm Stables Foundation, Inc., is to assure that the Rodes Farm Stables, related facilities, and nearby meadows, pastures, and other open spaces are preserved, managed, and maintained for equestrian use; provide, encourage, and promote equestrian education, recreation, therapy, and related activities; and participate in the rescue, rehabilitation, and care of neglected and abandoned horses.

Membership in the Foundation is open to all upon the payment of annual dues, currently set at $25 for full-time students, $35 for individuals and $50 for families. Each dues-paying member will be entitled to one vote at meetings of the general membership. Additional contributions toward the work of the Foundation are welcome. Make checks payable to: Rodes Farm Stables, Foundation, Inc., Box 707, Nellysford, VA. 22958. While the Foundation plans to apply for tax-exempt status and also develop charitable activities, membership dues and contributions to the foundationâ€™s general fund are not deductible for federal income tax purposes.”