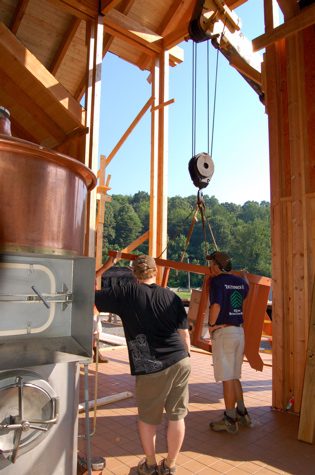 It’s official, the brewing tanks started going in Wednesday morning at Devil’s Backbone Brewery in Beech Grove at the intersection of Route 664 & 151 in The Village At Glen Mary. We first told you about the tanks making the trip to the U.S. from Japan here last year. They had been in storage for several months until the building was ready for them to be installed. Devil’s Backbone will be Nelson’s 2nd microbrewery to start operation joining, already opened, Blue Mountain Brewery in Afton. 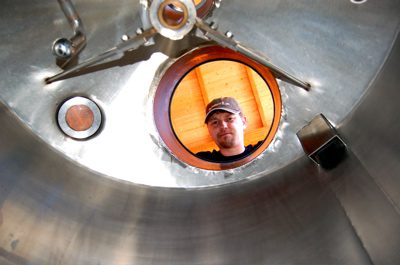 Above, Brewmaster Jason Oliver of Devil’s Backbone, takes a look down into one of the tanks set in place Wednesday morning.

“This is an exciting time for us and for Nelson County,” says founder Steve Crandall of Devil’s Backbone. “After all of the wait it’s nice to see the tanks being put in place and tremendous progress being made on the construction of the brewery,” he continues 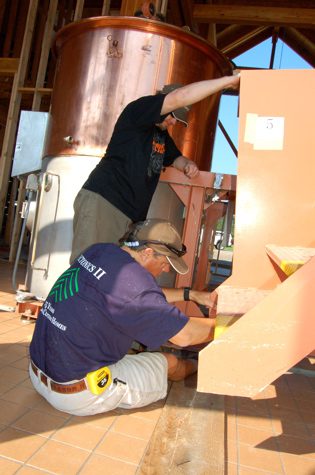 Left, Jason Oliver holds the steps up to the brewing platform in place while Steve Crandall uses a wrench to level the assembly.

Steve says the newest brewery should be finished and opened in the late fall of this hopefully by November if everything is on track. The brewery is just one of many construction projects taking place in Beech Grove. Last week we told you about, Jeff Stone, at Wintergreen Winery where a major event facility expansion is underway diagonally across the road. 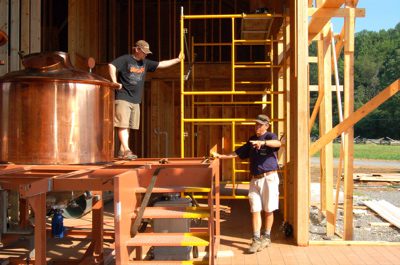 Above, Steve talks about leveling the platform with Jason.

Look for more on the brewery’s construction and dates for opening in the upcoming August 2008 issue of Nelson County Life out later this month.