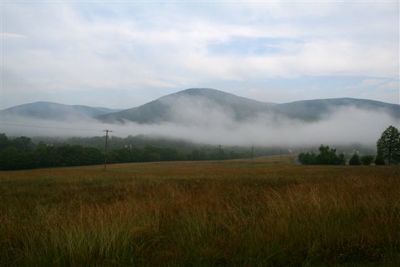 I was talking to Yvonne Harris over at a.m. Fog just the other day. You hear about about her and Ken every morning on our webcast. They’re just up the road on the Nelson-Albemarle County Line on Route 151. She was telling me they already have zucchini & squash. Yep Homer it’s true!

And for a limited time Big Seeded Watermelons are only $4.00. You know it’s summer when you start talking watermelons, picnics, and swimming!
-Lettuce buches $1.00.
-Petunias 50% off, until all gone.
-All other annuals 25% off, not including hanging baskets.
–Mention NCL’s weather report when you stop by, you’ll get 25% off any tree purchase until the end of June.

In their produce report Yvonne says, they are currently fresh picking sweet cherries, raspberries, and mushrooms; no spray – chemical free – just what nature and fish emulsion gives us. Which begs the question… What’s in your food??? You have to be careful about what you feed yourself and your kids these days, been paying attention to the news lately?

And just across the road at Blue Mountain Brewery they’re serving a cherry/chocolate/goat cheese crumble made with amFOG cherries. Now that is yummy!

When you meet folks like Ken and Yvonne you just can’t help but like ’em. They’re the real deal.

And they want to thank you for making this a spectacular spring! They’re looking forward to a stellar growing season and bumper crops from the fields. Things are changing all the time at amFOG…keep your ears open and stop in to see ’em.

And don’t forget to Mention NCL’s weather report when you stop by, you’ll get that 25% off any tree purchase until the end of June.

Before I get started today, I just wanted to make mention about the news we posted and what you’ve been seeing all weekend about the death of Tim Russert. I never met Tim, but I did lots of work with NBC back in my television news days. Yvette and I both spent a considerable time in the news business before launching NCL. Folks there are lots of jerks and less than ethical people in TV news these days. If there were more like Tim Russert, it would be a much more admirable business. He was the standard, and will be greatly missed.

Thanks to Henri and Elaine Weems for today’s weather photo, they always send in some really nice ones and today is no exception. With some of the showers around fog has been developing overnight. They captured it perfectly!

The weekend pretty much cooperated weatherwise. We did see some showers Saturday that made some of the outdoor events go to a Plan B, but there wasn’t enough rain to call anything off completely, just make a few changes. Sunday afternoon some hit and miss air mass thunderstorms, those garden variety, made an appearance in parts of the county. For the most part amounts were less than a tenth of an inch.

Today will bring the chance for thunderstorms again in the afternoon. Some of these storms could be strong to severe once again as mentioned by the NWS in their hazardous weather outlook. This will be the last really hot day for the foreseeable future. The remainder of the week looks generally dry with afternoon highs in the upper 70’s to lower 80’s. With nighttime lows in the 50’s valley and even some upper 40’s on the mountains later in the week.

Have a great Monday everyone!