Above, Sharen and Ed Dowdy of Shipman, pose in front of what’s left of their home after a confirmed tornado hit on Thursday May 8th.

Much of my professional life was spent as an on air television weatherman working for various affiliates and networks across the country. That 10+ years on television involved making the scene, chasing, tracking, and reporting live on tornadoes. I can’t remember how many I covered, probably at least 75-100 over the years.

Once we moved to Virginia I pretty much forgot about them. Tornadoes can and do occur in all of the states, but they are less frequent in Virginia, non existent in comparison to the numbers we had back in the mid-south. You don’t have to convince Ed and Sharen Dowdy of Shipman that tornadoes can occur here in Virginia. They just lived through a direct hit on their home off Dowdy Lane last Thursday night. A minor EF0 with winds estimated around 75 MPH, but a tornado none the less. “We were teasing our niece that was working on a school paper in the floor that it wasn’t going to be that bad. Boy we were wrong,” laughs Sharen.

Sharen and Ed stand in what’s left of their dining room with the sky above.

Both spent years in Iowa, a very active state for tornadoes in the warm months. But like so many, she and her husband didn’t think much about them once they moved back to Virginia. “The first thing I recall hearing was the flying door of the kitchen, the breaking glass, my niece yelling out, and I instinctively knew something was not right. The wind didn’t sound right to me,” Sharen continues. “I was tracking the weather radar out of Roanoke. The only thing we were seeing on local TV was Flash Flood Warnings for Nelson County. All of the sudden there was a change in the wind, a thump on the side of the house, then the windows blew out, Ed remembers. 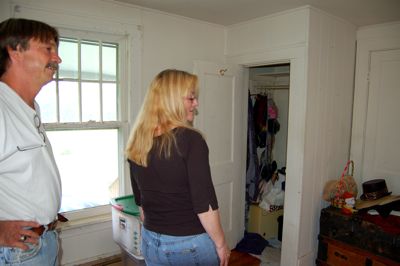 Sharen points out the closet she and her niece, Ashley Campbell, dove into as the tornado hit.

The National Weather Service never issued a specific tornado warning for Nelson County the night of the Thursday storms, but many other nearby counties were under tornado warnings. A tornado watch (conditions ripe for the development of tornadoes, had been issued earlier in the evening) Many Virginians live under the myth that tornadoes will not hit in mountainous regions. Though much less likely to occur, they can and do. The recent occurrence of tornadoes here in the past month has lots of folks on edge. However, many decades in the past have seen their share of tornadoes as well. On August 6, 1993 one deadly tornado killed four and injured 238 people. It was the first recorded violent tornado in Virginia since 1950, according the Virginia’s Emergency Management site. The daily and annual records for tornadoes were shattered in 2004, when 87 tornadoes struck the Commonwealth. The hyperlink to VAEMA in this paragraph is a great historical account of tornado history in Virginia. Then of course there’s the most recent round that pummeled Suffolk.

Where April and May can be active tornado months in the mid-south and gulf coast states, July is the most active for Virginia, making the recent ones a rarity for this time of year, but again not unheard of. 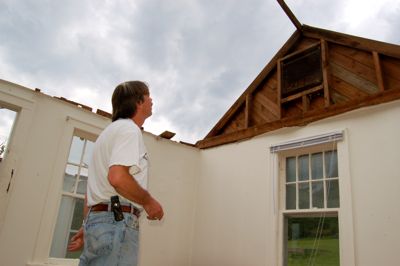 Ed looks up where his roof is now gone.

“I wandered back in the dining room and noticed the ceiling was gone. Could have sworn I saw the roof when I glanced up, then I felt it sprinkling and it took me a minute to understand and realize that the entire roof was gone,” Ed continues. 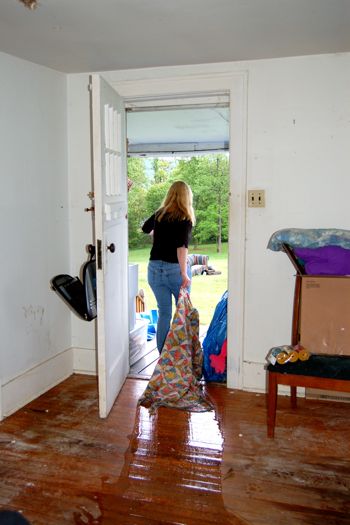 Much of the past week Sharen and Ed have been cleaning up and saving what they can.

The Dowdy’s tell NCL they have been so blessed with people coming by and helping them clean up and giving them food and items to help them get back on their feet. They currently are living in a relative’s house across the street until they work out a permanent plan in the coming weeks.

You can read much more about Ed and Sharen in our upcoming June issue of Nelson County Life, out in just a few days.