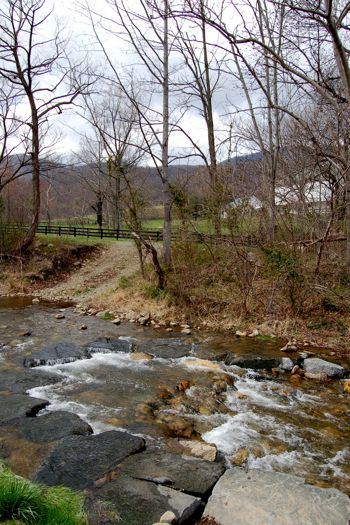 There’s something about early Spring. You begin seeing hints of green, and then wham, snowflakes! Where did they come from. That’s part of the ritual in moving from Winter to warmer weather. It can’t really decide what it wants to do. But there’s one decision you don’t have to fret over, that’s stopping in at Ken & Yvonne Harris’ a.m. Fog on the Nelson-Albemarle Line along Route 151. They are as close to the farm as you can get!

Not to mention all of the other vegetables, annual, and perennial plants along with lots of fruit trees ready for the spring planting! Spring is here!

And have you seen that new beautiful farm market going up, they ARE OPEN FOR BUSINESS NOW, and soon they’ll be featuring hot teas, coffee, muffins, and bread.

We’re back in the saddle here at NCL after a little computer trouble during the past 24 hours. Our NCL-Weathernet station here at the office is back up and running. It must be the week for computer gremlins, the station over at Wintergreen Winery in Beech Grove is having some issues this week as well. But I was over there yesterday with Jeff and it’s being looked into, should be back up soon. But look at the shot we took over there yesterday, at that point who cares about the computer, what a great day Tuesday ended up being.

After a cloudy damp start, the afternoon turned off very warm and partly cloudy with temperatures even going several degrees above predicted highs, with some locations flirting with 80Â°. Forecasted showers never developed during the daylight hours and only widely scattered showers occurred overnight Tuesday.

Today will be a mostly sunny day, but not as warm as yesterday due to a cold front that’s moved through keeping temperatures down with a cool northerly breeze. By tonight skies will go partly cloudy after midnight in advance of our next rainmaker that arrives by Thursday afternoon. As we near the end of the week temps warm back to the mid 60’s for afternoon highs.

Right now the second half of the coming weekend looks dry and fair.

The rest of the week into the weekend continues to have rain in the forecast until Sunday when skies become partly cloudy. Temps remain pretty fair during the period with mid 60’s for daytimes highs in the valley and around around 60Â° on the mountains. Overnight lows generally in the 40’s and 50’s.

Have a great Wednesday everyone!
KnowYourNelson.com