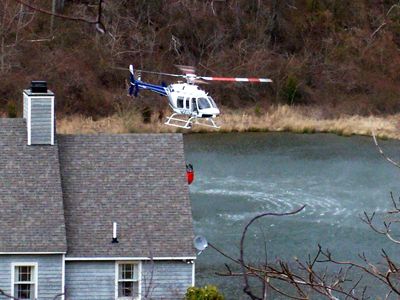 A helicopter drops in to get water from a nearby pond after fire jumped a fire break earlier today near the Blue Ridge Parkway.

Another Busy Day For The Firefighters.

This morning, fire crews closed Rt. 56 again from Vesuvius up to the BRP to
continue backburning areas that were still considered a threat along the fire line.

At 5 PM, Route 56 re-opened along with the 14 mile stretch of the BRP that
has been closed for days.

There is still heavy smoke in the area of St. Mary’s Wilderness, but the work
done by all the crews working the fires is finally starting to pay off.

Our area here on Bradley Lane is clear of smoke, however, on parts of the BRP
and Vesuvius the smoldering still can be seen.

Looks like it’s going the turn out to be a great weekend here in Whetstone Ridge!

The Clark and Simmons Families

Hi Tommy,
I just got up here around 3pm and we had to come up Irish Creek because Rt. 56 was closed at the RR crossing in Vesuvius.
I never stopped to ask what they were doing and when they would be done.
I just assumed it was more of the same backburning.
I did see the figherfighters and several vehicles at the same spot on Rt. 56 and BRP
intersection also around Haynes Chapel.
The smoke is really thick on that side and we here are in the clear because of the wind.
Coming up 81 at the Raphine exit then toward 11 was a real eye opener!
The fire encompasses such a large area it really scares you.
I haven’t seen or talked with Scott today but he always comes up to visit and I will
share your e-mail with him and if we have anything exciting to foward, I will send it your way.
Also, on a funny note…
The photo of the helicopter getting water from our neighbors pond has a great story behind it.
Just when the bucket was lifted, a 4 foot carp jumped out of it! It surprised all the onlookers.
Ever heard of fishing from a helicopter? We have now!

As we have been following since the beginning here, the fires continue to burn near the Blue Ridge Parkway at the Nelson-Rockbridge-Augusta County Lines.

Thanks again to Scott Clark for sending this to us. At 6:30 PM EDT he sends the following update:

“Fire jumped the line on Rt. 56 and the copter was called in for water drops
Everything here is ok.” 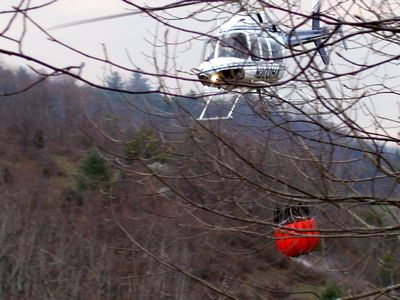