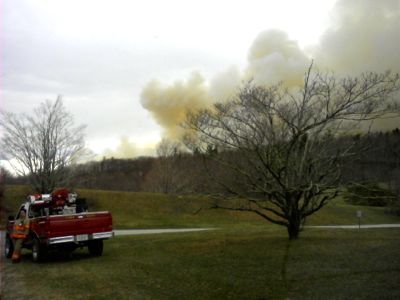 Above, firefighters set a back burn looking toward the Blue Ridge Parkway.

Thanks to Scott Clark from the BRP area west of Montebello, for sending us these photos. Scott tells us at 4:15 PM EDT:

Fire has consumed an estimated 5000 acres of the area in and around the forest.
Back-burning that began earlier today on the right side of Rt. 56 from the BRP down toward Vesuvius has almost wrapped up and Rt. 56 is expected to re-open by 5:30 p.m.
Our area is heavy with smoke 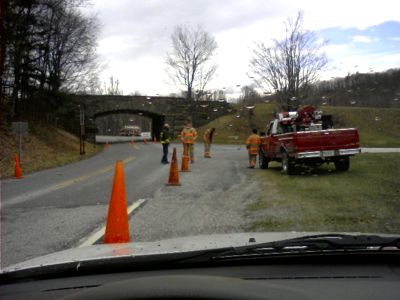 This is along Route 56 right at the entrance to the BRP where firefighters are set up just north and east of the fires. 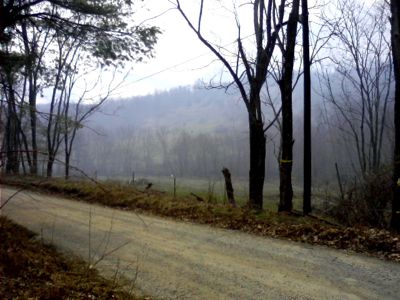 Here is the latest information we have from Shannon Simmons at Whetstone Ridge regarding the fires. Thank you Shannon for keeping us in the loop on what is happening up there:

-Rockbridge County brought in heavy machinery to work the fire.

-Power has been out in parts of Montebello.
Central Va Co-op just finished working on the lines and power
has been restored.

-Helicopters are doing rounds near 56 and the parkway right now.
We are hoping the fire can be contained at the parkway.
The Montebello Fire Dept. will be up around Skylark Farm to
keep an eye on the area because that is where the danger zone is.
Fortunately, the fire has not gone south and has not crossed the parkway.

-Scott Clark said, even though you can see and smell smoke,
the wind is not as bad as it has been the last 2 days
and with the wind still pushing north-west, we are safe for now.
You can click onto Scott Clark’s weather station monitor by clicking here:
http://www.findu.com/cgi-bin/wxpage.cgi?call=cw9022&last=120

I will update you as necessary,
Take Care,
Shannon Simmons

NCL continues to monitor the situation along the BRP involving The St. Mary’s Wilderness area. As of very early Thursday morning, we are receiving eyewitness reports that the fire has spread and continues to grow as of this posted update.

We just received an update from the Simmons again up at Whetstone Ridge along the BRP very early this morning: Here’s what some of their neighbors report as of 11:30 PM Wednesday night:

Parkway is now closed and the fire has grown to 1400 acres. Isnâ€™t near us yet but I will be up most of the night watching. Its an eerie orange glow looking toward the parkway. 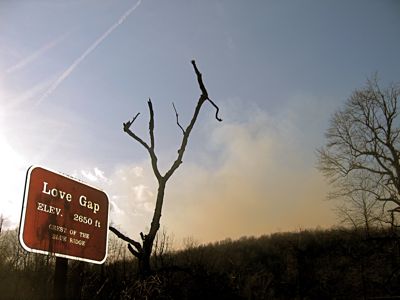 Our, Mountain Photographer Christina Kline, sent this photo in late this evening. You can see the smoke rising from the western side of the Blue Ridge Parkway at Love, Virginia. We will have more pictures up later this evening and in tomorrow’s weather. 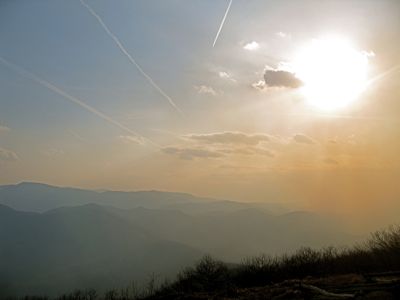 The Simmons sent along more information here, along with links to the The Staunton Leader & News Virginian who have pictures. Thanks for the updates! :

The Blue Ridge Parkway was been shut down between Route 56 and Love Gap at milepost 16 at 11 a.m. today.

Here are the latest photos of the wildfire
See Link below (The News Leader – Staunton, VA.)

I was out a few minutes ago and went to the south-looking overlook on top of Wintergreen. Could not see anything looking south resembling smoke plumes – but is was quite hazy south and looking west toward the Shenandoah Valley it was completely socked in and gray. Given 37% reported humidity — my gauge here at the house shows even lower — there must be other fires going on …

NCL has been receiving several e-mail this mornign about heavy smoke along the BRP near the Nelson-Rockbridge County Line.

John Taylor wrote us with the following:

Several of us noticed a distinct wood smoke smell in the air up here on top of
Wintergreen. It is also hazy despite a 31% relative humidity.

I checked Wintergreen dispatch and they told me there was a fire about 15 miles
down the parkway. FYI

We also got this e-mail from the Shannon Simmons up at Whetstone Subdivision:

I just spoke with Scott Clark and got the latest update on a wildfire that is burning very close to us.

He said that it is visable from Rt.11, covers a very large area, and is being contained at the moment.

Every now and then, Scott said he smells smoke and many animals have crossed over the parkway to our side to escape the very large fire. He also said the wind is blowing north, pushing the fire
away from us and it has not crossed the parkway.

Scott will keep me posted and I will e-mail you with any further details as neccessary.

Anyone that has pictures from that way send them on to us at: info -at- nelsoncountylife.com