Our faithful readers, Henri & Elaine Weems, noticed this today and forwarded it to us:

Thanks for letting us know!
NCL 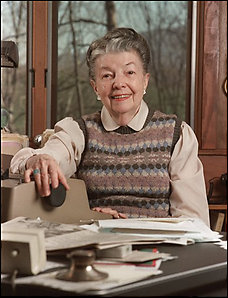 Novelist Phyllis A. Whitney is shown at her home in Nellysford, Va., in this 1989 file photo. Whitney, whose romantic suspense tales sold millions of copies and earned her top accolades from the Mystery Writers of America, has died. She was 104. Whitney died last Friday, Feb. 8, 2008, in a Charlottesville hospital, not far from her home in Nelson County, her son-in-law, Ed Pearson, said Thursday. (AP Photo/Ken Bennett, file) (Ken Bennett – AP) Photo courtesy: www.washingtonpost.com

Novelist and Virginian Phyllis A. Whitney, whose romantic suspense tales sold millions of copies and earned her top accolades from the Mystery Writers of America, has died, her son-in-law said. She was 104.

Whitney died Feb. 8 in a Charlottesville hospital, not far from her home in Nelson County, said her son-in-law, Ed Pearson.

Whitney wrote more than 75 books, including three textbooks, and had about a hundred short stories published since the 1940s.

Whitney’s last novel, “Amethyst Dreams,” was published in 1997. She began working on her autobiography at 102.

In 1961, Whitney’s sixth juvenile mystery “Mystery of the Haunted Pool” received the prestigious Edgar Allan Poe Award from the Mystery Writers of America for the best children’s mystery story of the year. She won the award again three years later for her book “Mystery of the Hidden Hand.”

In 1988, Whitney was named a Grand Master, the Mystery Writers of America’s highest honor. In 1990, she received the Agatha award, for traditional mystery works typical of Agatha Christie.

Born in 1903 in Yokohama, Japan, to American parents, Whitney lived in the Philippines and China before coming to the United States at 15. She had already begun writing at the age of 12 while a student in a missionary school in China.

Earlier in her life, Whitney worked in bookstores and libraries, read manuscripts and lectured before eventually landing a job as a children’s book editor for the Chicago Sun and later in a similar job with The Philadelphia Inquirer.