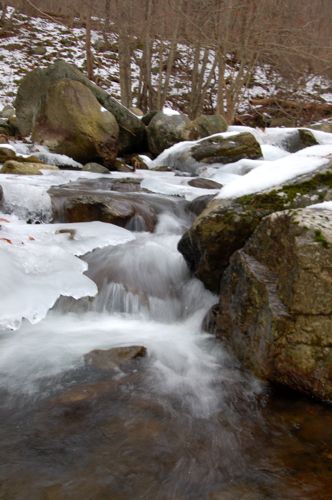 Before we kick off into weather, don’t forget Nelson’s own Jenn Rhubright from Arrington is our featured music artist all week long. You’ll be hearing live recordings from her first official show in her new gig with Jive Katze from the Gravity Lounge just this past December. You can read lots more about them below today’s weathercast.

Remember to always check out the latest entries on our site by looking to your left under recent posts. We have lots of neat stuff up there including recent news, restaurant specials, happenings at the local wineries and the brewery, just to mention a few! Speaking of, we have been keeping up with the latest on the opening of The Dogwood Restaurant in Nellysford. Tuesday they posted their opening date for next week. Read details by clicking here.

Tuesday was certainly a day that felt like Spring. We started the day with some sprinkles. Though skies remained mostly cloudy temps still made it near 60Â° in the valley and into the 50’s along the BRP. Lots of the snow pack and ice in the rivers at higher elevations started thawing like the shot above we got on the way up to Montebello Country Store yesterday. Winds started kicking up in the afternoon, and by last night they were howling at times. There are CANCELED FOR NELSON out for much of the area through the part of the afternoon. You can always see the latest weather alerts by checking the RSS Weather Alerts feeds directly under the cover photo on the upper left hand side of your screen. Showers moved across the area last night as well in advance of a very strong cold front which is helping to fuel the strong winds.

Wednesday won’t feel anywhere as nice as yesterday. We will see the winds settle down in the late afternoon setting the stage for a very cold night. By Thursday all eyes are on a developing storm system that may bring freezing rain to parts of Virginia. Forecasters in both the Blacksburg and D.C NWS offices are making reference to this possibility.

NWS Blacksburg:
This system looks to
either produce rain/freezing rain. By Friday morning..

I want to STRESS this is not a sure bet right now and the better potential is along and west of the BRP at this time. But there are a few things in play that could make it happen and we’ll just have to watch it very closely over the next 24 hours. The latest updates will be posted here as forecasts become more clear. Regardless it looks like the event would start late Thursday night into Friday morning if it pans out. I’ll keep you posted along the way.

By Friday night, skies become partly cloudy setting the stage for a really nice weekend with temps in the mid 50’s for valley highs and mid to upper 40’s for the mountains.

Remainder of the week: Freezing rain Friday morning changing to rain with temps generally in the lower 40’s valley and upper 30’s mountains. Overnight Friday temps fall to the upper 20’s valley and low 20’s above.

The entire weekend looks mostly sunny and pleasant for now.

As promised Jenn Rhubright of Arrington and Jive Katze takes us out with a cut from their collection. This one’s called One For My Baby.

According to the online urban dictionary a “Jive Cat” is “not the ordinary person you or your homeboys would hang out with”. And what has a less jiving, less hip and less swinging reputation than a “German Jazz Cat” anyway? â€“ Well, Jive Katze is not your ordinary Jazz band.
Jive Katze is the newest addition to the diverse Charlottesville music scene. They combine vocal jazz in the tradition of Billy Holliday and Ella Fitzgerald with contemporary forms and concepts influenced by Brad Mehldau, and Kenny Werner.

Jenn Rhubright’s intimate renditions of jazz classics meet the sensitive and versatile playing of German born pianist, Gerrit Roessler. Jenn contributes her unorthodox approach to music as well as her vast experience with rock and pop from her nationally acclaimed bands Clare Quilty and The Dirty Dishes. Gerrit on the other hand, has a background as a formally trained jazz musician and paid his dues playing mostly in Europe and the US with his award winning band Mars Attacks.

It is this difference, and the artistic tension that makes this project so interesting: Sometimes only subtly and carefully altering the divine masters, sometimes overhauling them drastically to create something entirely new. Although they are not a retro-jazz band that attempts to re-enact an alleged golden past, they are respectfully aware of the vast tradition of vocal jazz and are attempting to translate it into the world of today. The result is an intimate and energetic performance that is strongly shared by the audience during their performances.

Although Jive Katze is conceptualized as a duo, Jenn and Gerrit are frequently backed up by Bassist David Cosper from South Carolina and Drummer Granville Mullings from New York.

Jive Katze is not in it for the money. They play for their love of music. That is why they decided to support a non-profit organization that is dedicated “to revitalizing the music and cultural community within the neighborhoods of New Orleans by helping its tradition bearers return to and stay at home.” By financially and actively engaging with “Sweet Home New Orleans” (http://www.sweethomeneworleans.org) Jive Katze feel they are reaching out to a vast musical tradition and heritage on more than the mere artistic level.