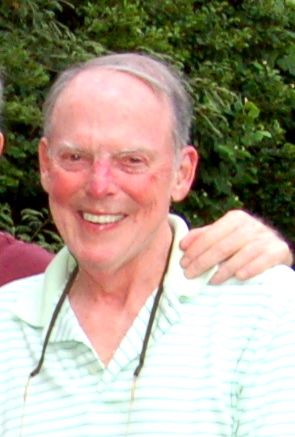 Today I got a phone call from a friend of our that told us Bob Ward of Nellysford passed away over the weekend. I didn’t know Bob for very long, probably a couple of years. I just sat and ate lunch with Bob a few weeks ago at Basic Necessities at the table out front in the window. He had stopped by on the way to one of the countless doctor appointments he always had to make. I remember the place was packed but I was eating alone. I asked Bob to sit down and have his soup with me. We talked about his past career, how life changes on your at the turn of a dime and how much he loved all of the gals that worked at Basic. “I just love coming here and I love the people in Nelson, what a great place to live,” Bob told me. 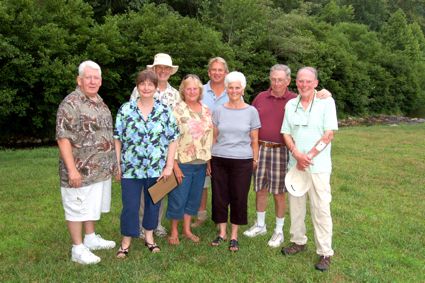 Last summer in the picture above his fellow Rotary members honored Bob for his hard work in the Nelson Rotary Club. Bob always kept trying to get me to join at every turn.

Though Bob had been through a lot over the past year, his health a constant challenge, he always smiled and always carried on great conversation whenever I would see him. We would often laugh about running into each other so much at Basic Necessities, almost keeping score to see who was there the most!

Though we were never real close friends, Bob was just one of the many faces that makes Nelson County feel like home and inviting. A face I’ll miss seeing as part of this great place he loved so much.

We’ll miss you Bob, but never forget you.

Cheers up there fellow!
NCL

Scroll for Obit and funeral information:

Samuel Robert Ward (Bob), 71, of Nellysford, died Saturday, January 26, 2008 at the University of Virginia Hospital. Born in Detroit, Michigan December 17, 1936, he was the son of the late Robert Samuel Ward and Hazel Winkelhaus Ward. Bob received his B.S. degree in Electrical Engineering from the University of Michigan serving as President of his 1959 graduating class. Bob was business editor for the Michigan Daily Newspaper for the University of Michigan. He was elected to many honor societies including Tau Beta Pi (National Engineering Honor Society) and most proudly Michigama, Michigan’s highest campus honor society for academics and activities. Bob was a Lt. in the U.S. Navy and served under Admiral Rickover in his nuclear reactor program in the 1960’s. He was a founder and partner of Dominion Engineering, Inc. in McLean, Va. He was active in several Rotary Clubs, including Nelson County and McLean, VA where he served as President 1995-96.

He is survived by his beloved wife of 47 years, Barbara Brandt Ward; two sons, Sam and his wife Cheryl of Erie, Pa; Jeff and his wife Lisa of Winston Salem, NC; a daughter, Katie Averna and her husband Paul of Warrenton; two brothers, Tim and his wife Kandy of Cloverdale, CA and Marsh of Reno, NV. His proudest legacy the nine grandchildren he left behind.