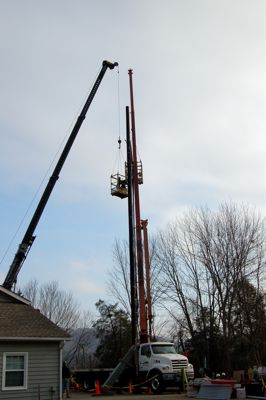 We’ve been telling you about AT&T Wireless’ installation of a new cellular / wireless tower in Stoney Creek late last year. Though no official confirmation of them making the site live has been announced, several users that have AT&T Wireless plans let us know the service has been working for the past several days. Great news for folks who have been wanting better cell coverage in the valley. Now the bad news…. It’s not very good so far.

Bruce Flight of Richmond who has a home in Stoney Creek, dropped us this e-mail Sunday with his observations:

As I was driving back to Richmond after the long Christmas holiday, I was more then excited to see my cell phone pop on when I approached the Wintergreen Fire & Rescue station, so I couldnâ€™t wait to get back this weekend and enjoy the use of my cell phone.

NOTâ€¦ while the AT&T cellular service and tower maybe a good thing for the folks at Wintergreen Fire & Rescue, in my opinion; itâ€™s a complete bust for the faithful paying regular subscribers of AT&T cellular service. The bottom line is the service is poor at best unless you are fortunate enough to have built on a hill or live/drink at Stoney Creek Bar & Grill.

I also wanted to see if I had service while walking my beloved dog around the bike path on Lake Monocan. Just in case I drop due to â€œthe big oneâ€, I wanted to know whether I could count on my cell or my good old Lassie four legged friend â€“ needless to say Iâ€™m in trouble but here you go:

-Starting from the Lakeside entrance on Lakeside Close â€“ very weak signal as I walk around the backside of the townhomes facing Lake Monocan.
-No service pass the dam and by Lake Monocanâ€™s beach & picnic area.
-No service on Hidden Springs Lane.
-Service begins to pick-up as I cross Hunters Point between Monocan #2 and #1
-Service continues well until the path turns left by the fire pond towards Stoney Creek East and becomes weak or no service.
-Little or no service from bath path on Stoney Creek East to Lakeside again.

Thanks for your observations Bruce! And anyone else that has noticed any coverages let us know, would be nice to compare.

We haven’t gotten any official word fro AT&T Wireless as to whether the poor coverage might be that they are just in a test phase with improved quality later. We’re going to check on it and let you know!