DON’T WANT TO READ THE FORECAST? SIT BACK & LISTEN BY PRESSING THE PLAY BUTTON BELOW (some users may need to click play button twice) 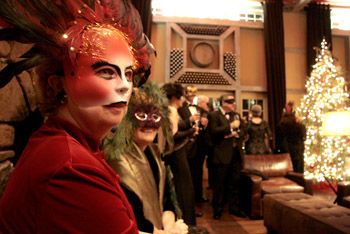 By now the champaign bottles should be put away and minds on the year to come. Our Hayley Osborne shot the pictures above at Veritas’ Masked Ball on New Year’s Eve as they rang in the 2008. You can see more of those pics here and other celebrations here.

John Taylor wrote:
Great weather for the snowmakers! At 8:15 am it’s windy, 11.8F, overcast, and we
had a light dusting of snow over night. There is some minor fog near the ski
area with clear skies directly above. They have been making snow since
yesterday — Highlands getting some of that.

2007 had several weather surprises up it’s sleeve and now that we have our own NCL-Weathernet Stations scattered all over the county, we finally are able to look at some of the data coming from those stations. Here’s a few of the numbers. We’ll be adding the other NCL stations annual data throughout the coming week:

Before we get into the forecast, for those of you wanting to check out the current slope conditions be sure to click on the Wintergreen logo up above.

New Year’s Day was fairly quiet across the area, but gusty winds sure made it feel chilly for much of the afternoon. At the office here in the Rockfish valley, we had gusts to around 20 MPH. On the mountain at our Devil’s Knob station they logged a 25 MPH gust. That’s going to be the real story over the next 48 hours as the gusty winds continue Wednesday driving wind chills down to zero or below from time to time. We’ll see a chance of light snow Wednesday morning. Can’t even rule out a light dusting east of the BRP, but this won’t be much of a system. Way back west near the VA-WV state line winter and heavy snow warnings were posted for more significant snowstorms. By Wednesday afternoon skies become partly to mostly sunny with very cold temps and gusty winds.

Look for low temps Wednesday night to be in the mid teens to near 20Â° valley, and around 4-7 degrees on the mountains. If we make it there, that will be the coldest weather of the winter season thus far. Brrrrrrrrrrrrrrrrrrr! By the weekend we begin a warm up into the mid & upper 50’s valley and mid 40’s to lower 50’s mountains.

The remainder of the week: Friday , sunny & slightly warmer with highs in the mid 40’s valley and around 40Â° mountains. By the weekend temps warm even more to near 50Â° Saturday and 55Â° Sunday in the valley, slightly cooler mountains. By the start of next week look for even warmer weather with afternoon highs around 60Â° on Monday.