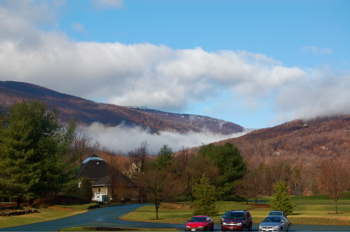 Monday was a big contrast to the weekend. The winds settled down for the most part Monday afternoon, though we didn’t warm up very much. In the valley it only reached the mid 40’s for about 30 minutes then began falling. Upon the mountain at NCL-Wintergreen Nature Foundation the temps never made it above freezing. They topped out at a cold 27.7 degrees for a Monday high.

Last night it was another cold one with mid teens to low 20’s for everyone. NCL-Nelson County Life Magazine here in Greenfield reached a low of 15.8 degrees, while NCL-Wintergreen Nature Foundation upon Devil’s Knob had a low of 17.8Â° Over at NCL-Hatcreek Farm Horseshoe Mountain, they had a morning low of 17.6Â° Today will be a bit warmer as winds kick around to the south bringing in slightly milder air. Not a big warm up, but a touch warmer than yesterday. The mountain should make it briefly above freezing into the upper 30’s by afternoon.

Tonight we’ll see increasing clouds which will help keep it warmer than last night. Wednesday will be partly sunny and seasonal. Thursday we’ll see chances for rain, sleet & snow in the forecast overnight. Right now it looks like we have even less moisture than last weekend’s system had to work with, so I am not impressed with this one yet, but stay tuned!

The remainder of the week By Thursday night chances for snow, sleet & rain enter the forecast. Friday snow and sleet early then changing to rain before ending. Saturday through Sunday look rainy from time to time with a slight chance of snow on Saturday night, though temps may not make it low enough at this point. Temperatures are generally 40’s for daytime highs and low and mid 30’s for overnight lows, with the mountains slightly colder.