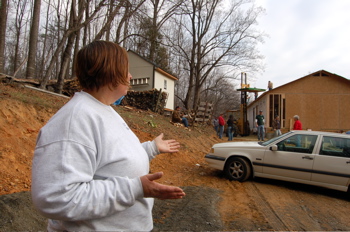 Ruth Terry of Deer Field Road in Afton looks on as volunteers work Sunday afternoon to rebuild the house she and her husband Clyde lost two weeks ago to fire.

A couple of weeks ago, Ruth and Clyde Terry were off shopping for groceries in Waynesboro when they got a call from their long time friend and fire chief, Tommy Harvey. “The fire chief called me on my cell phone and told me that the house was on fire,” says Ruth. For over 20 years they were the ones answering calls to someone else’s fire, but this time it was their own home. “We were luckier than most people. I had a shirt in the truck, a pair of boots out in the shed I hadn’t opened yet, We had just bought some groceries so it wasn’t as bad as someone losing their life,” add husband Clyde. 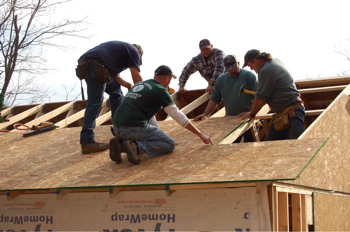 Volunteers place sheets of decking on the roof of the Terry’s new home under construction.

Unfortunately all of their pets were lost in the fire too. “The hardest part was the loss of the pets. I had two cats and one dog. Maggie was the dog, Sugarpop, & Lottabitt,” Ruth continues.

But their house was gone, noting left. “I was the first truck here. When we left the station we knew it was Ruth’s. I had to make the phone call to her.,” says Tommy Harvey Chief of the Rockfish Valley Volunteer Fire Department.

Being a fire and rescue family for more than two decades, folks in the Rockfish Valley Fire Department knew if fire could take it to the ground they could help Ruth and Clyde get it back off the ground. In just two short weeks fellow members of the fire and rescue, builders, and friends, have been pitching in to see that Clyde and Ruth get back in their home as close to Christmas as possible. They probably won’t make it by Christmas Day, but they won’t miss it by much. By Sunday afternoon they were already putting decking down on the roof. 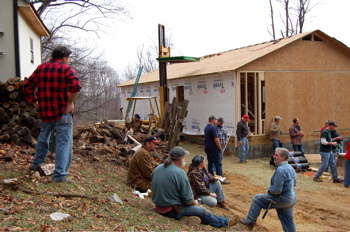 Clyde Terry, in the red plaid shirt, looks on as his friends and members of his fire and rescue family rebuild their new home.

“We were just determined to get this house back up, not waiting on the insurance company,” adds Chief Harvey.

Clyde and Ruth have lived in their house since the early 80’s. Though they knew their friends would help out, they never expected this much help. “I was expecting that everyone would help some, but I wasn’t expecting them to throw it back real quick,” Clyde says. 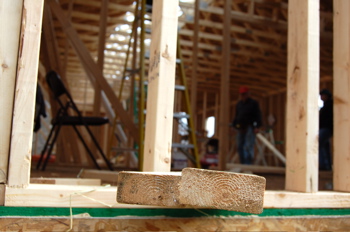 By the end of the day Sunday the Terry’s home was in the dry and well on it’s way to completion in a few weeks.

Ruth has seen countless people lose their homes to fire in the past, but says it’s different when it your own. “It’s been really overwhelming, the response of everybody. I could never imagine that all of these people would jump in donating their time.”