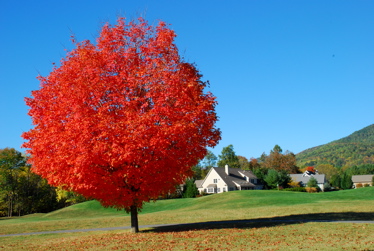 We continue to see plenty of brilliant Fall colors across Central Virginia and Nelson County. Today’s weather photo comes to us courtesy of Ann Strober in Nellysford. Ann’s been sending us a steady supply of great images captured with her new Nikon D-40 camera. Be looking for many more in the coming weeks. She’s got some great ones!

Election Day is now in the history books. Weather for Tuesday’s voting was perfect, though a little breezy and cool for a big part of the day. You can click here to see the precinct results from yesterday’s election. Last night was a bit breezy with winds spilling behind the cold front that moved through. Today won’t be much of a change from that, and we’ll continue to see some gusty winds, especially in the first part of the day. Tonight promises some of the coldest weather yet, with temperatures dipping to the low 20’s in the mountains. If we see the winds settle down to near calm, a widespread hard freeze will occur.

The national forecast map has high pressure controlling our weather over the next 48 hours. Breezy winds for the first part of Wednesday will begin to diminish in the afternoon.
Map updates daily by 5:10 AM Eastern

Looking ahead a couple of days high pressure stays parked near Virginia keeping fair skies in the forecast, but cooler temperatures as well. A disturbance toward the end of the week may provide chances for flurries or light snow in the mountains mainly west of the BRP.

Your local forecast including: Shipman, Lovingston, & Roseland
*Today Sunny & breezy early in the day, cool with diminishing winds by afternoon.
*Valley : High temps near 54Â°
*On the mountains above 2000 feet along the BRP, Montebello, Wintergreen, Devil’s Knob, and Love, Sunny & breezy early, chilly
Highs around 43Â°
Winds: NW 15-25 with higher gusts diminishing to 10-15 in the afternoon.

The weekend looks partly to mostly sunny with temps warming by Sunday to near 60Â° valley, near upper 40’s mountains. Temps moderate into the low & mid 60’s by early next week.