NCL has obtained additional information about Tuesday night’s accident on Route 151 near Tanbark Road. An initial eyewitness told NCL she saw a tractor trailer go through the accident scene as she was pulling up. As we stated in our earlier reporting we did not notice any large truck on the scene during our time there and had no verification as to whether it had any part in the wreck. Tommy Harvey of the Rockfish Valley Fire Department and owner of Afton Service Center, told NCL this afternoon that video surveillance cameras at his business caught the accident on tape as it happened. Mr. Harvey tells NCL that a truck was not involved in the accident, though one could be seen passing through the accident scene shortly after it happened. “It did not contribute to or was it involved in the accident,” says Harvey. As stated earlier below by VA State Police Sgt. David Cooper, the cause of the accident appears to be from the car being driven by 65 year old Lloyd Puckett swerving into the path of Ms. Gertrude Johnson of Nellysford.

NCL has learned that 54 year old Gertrude Ann Johnson of Nellysford was killed last night in the accident we have been reporting. According to Sgt. David Cooper with the VA State Police in Appomattox, Ms. Johnson was killed after a car being driven by 65 year old Lloyd Wayne Puckett of North Headwater, Virginia crossed the double yellow line heading northbound into her southbound lane near Tanbark Road. Sgt Cooper says another passenger in the car with Ms. Johnson, 63 year old Betty Sanford of Greenfield was injured as well and transported to UVa Medical Center. Her condition is unknown at this time. Mr. Puckett was injured as well and transported.

Sgt Cooper said the accident is still under investigation and charges will be forthcoming.

Nelson County Life Magazine has confirmed with Virginia State Police this morning that last night’s accident in Afton on 151 did involve the death of one of those involved. We do not know the name of the person killed at this point, but VSP did confirm it as another fatality. This makes five traffic deaths on either 151 or 6 in just the past month. 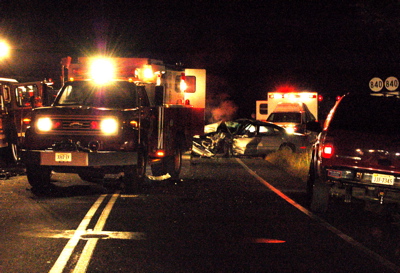 This is the scene just before 10PM on Route 151 near Tanbark in the vicinity of Afton Service Center. The entire road is blocked and NCL has learned this is most likely another fatal accident.

It appears that Route 151 through Nelson County has become deadly once again Tuesday night. Though still unofficially confirmed, NCL believes at least one fatality has occurred since the county medical examiner, Dr. Bob Raynor, was dispatched to the scene around the time NCL left on the way back to the office to file this report. A teenage eyewitness who had just left her evening job as a waitress at a nearby restaurant, said the wreck happened right in front of her as she was traveling northbound along Route 151. “I saw what looked like a large semi style truck going through the intersection as the accident happened. I was not sure if it hit the cars or if they were swerving to miss it,” says Jennie a waitress at D’Ambola’s Restaurant in Afton. We do not know Jennie’s last name as of this report. But did speak personally with her on the scene while she was stuck in traffic.

On the scene, NCL didn’t see a large truck, but the entire view on the north side of the accident was blocked from our view so we have no way of knowing if a truck has anything to do with this particular accident. We saw two cars involved when we arrived. One shown in the top photo above in the center of 151 and another car off the west shoulder of 151. Rockfish Fire & Rescue Crews were working at a very intense pace to try and free the victim or victims inside the crushed vehicle.

Accident reconstruction teams from VA State Police were called to the scene. This is an almost certain sign that a fatality has occurred, but again not verified as of this preliminary report late Tuesday night. Authorities are diverting all large trucks away from the area and keeping them on I-64, Route 250 and U.S. 29 until the scene has been cleared.

Additional photos of the scene as it appeared just before 10PM Tuesday night. 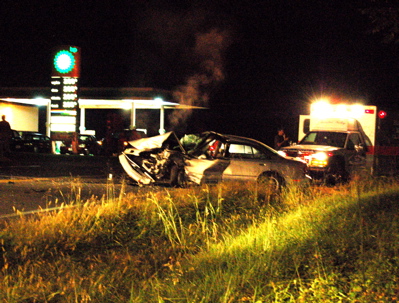 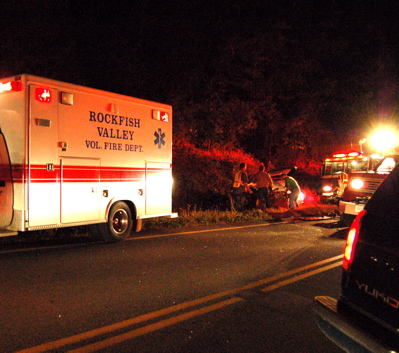 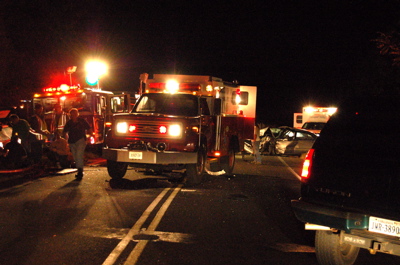 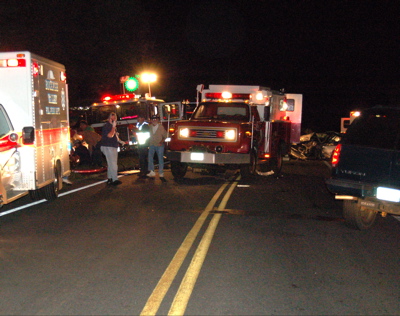 Picture(s) will be posted shortly … Chopper is about to land … Accident reconstruction team has been requested … County medical examiner has been called out to the scene … Albemarle County being asked to held redirect truck traffic … Truck traffic from Rt. 29 to Rt. 6 will have to be redirected, Faber Fire asking for assistance …. 10:07PM

There are reports of a multi vehicle crash with multiple entrapments near Afton Service Center and Rt. 151. Developing â€¦