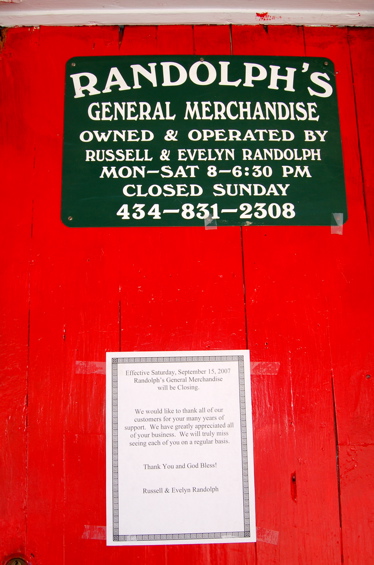 This is what the door looks like at the legendary Randolph’s Grocery just east of Schuyler. 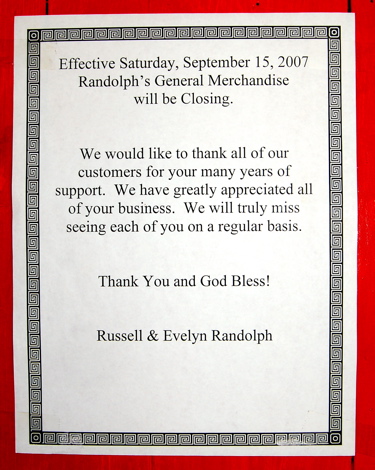 A closer view of their farewell message in mid September 2007.

We first told you about Mr. Russell Randolph in our April 2006 NCL. Back then, in spite of some rather tough health issues just the year before, Mr. Randolph continued to operate his store just as always since 1981. He had worked at the old store since 1954, back when he was just 16 years old. I always loved stopping at Mr. Randolph’s store on my way out of Shipman going to Schuyler delivering the magazine each month. There’s not much out there on the trip between James River Road and where you turn toward Schuyler. Mr. Randolph’s store was always a nice place to stop and take a break from a day’s driving around the county. He always smiled, never complained, and was always happy to see us come by with the new issue. I didn’t know Mr. Randolph for very long, just a couple of years.

When I was making the route last week, I was saddened to see the sign in the photos above on the old wooden door as you enter the store. On September 15th Mr. & Mrs. Randolph finally called it quits. What a long road they have traveled. They deserve a rest! But I will miss seeing Mr. Randolph as I make my way through the intersection at Glade Road toward Schuyler. 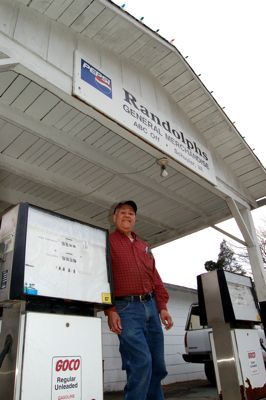 Though I won’t be stopping for a soda there anymore along the way, I will always have fond memories of my times there.

Best of luck to you both Mr. & Mrs. Randolph! We will miss you!