Update 2:48 PM EDT – Due to a phenomena called cold air damming, where moisture gets trapped up against the Blue Ridge Mountains, we’re having a hard time getting rid of the low cloud layer on the Rockfish side of the mountains. To the west skies are partly cloudy to mostly clear in many locations. We still have a shot at seeing some sunshine, but it’s having a very hard time clearing out the moisture. Due to those clouds, predicted high temps probably won’t make it. I’ll have more on cold air damming and a sat shot that shows it perfectly in my Tuesday weathercast.

-T-
Update 12:40 PM EDT: Sunshine will eventually work into the area later today. Clouds are hanging in across the area.. Light NE winds have kept temps down the first part of the day. We will begin warming as the clouds thin. Local satellite shows the clearing line very near the area, Staunton on the noon half hour was reporting partly sunny to mostly clear skies. That area will move our way over the next couple of hours.

One other mention. Severe weather may be in the future on Tuesday. Perhaps even an isolated tornado. Believe it or not the remnants of Tropical Depression Erin will kick abundant moisture up our way Tuesday. This will combine with other factors to create a possible severe weather scenario. I’ll talk more about this in Tuesday’s forecast tomorrow.

Have a great rest of the afternoon.
-T- 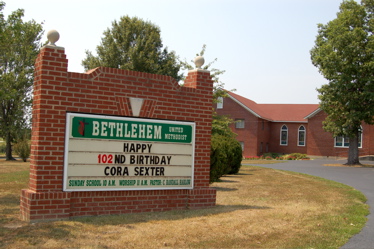 Several things to talk about this morning before we get off into the thick of the weather. First I just couldn’t pass up wishing Happy Birthday to a senior mentioned on the sign in front of Bethlehem Methodist in Roseland. Happy Birthday Ms. Cora Sexter! I don’t know Ms. Cora, but anyone that makes it 102 years in this world deserves recognition! I saw this Sunday driving back from Amherst along 151 in Roseland. Here’s to 103!

Secondly this morning NCL says hello to Mr. & Mrs Simmons and the rest of the folks up on the Blue Ridge Parkway in The Whetstone Ridge Subdivision Association. We got this really nice reader comment last week from them:

August 16, 2007 10:56:58 AM EDT
Mrs. & Mr. Simmons wrote:
Love the website!!! Interesting articles, great videos, and the audio weather is
awesome! Keep up the great work! Iâ€™m sending your link to everyone up
here at Whetstone Ridge Subdivision Association!
We are a small community located off the Blue Ridge Parkway (Rt 685) near mile marker 27 and the W & L Farm.
Again, we appreciate the weather reports since the weather for our higher elevation (3000 ft) can be drastically different.
Your website will be of great benefit to our mountain community and the members of our association.
Thanks Again

We thank you for passing along our website to everyone up there and appreciate you reading! You can see more of what people have to say about our site and all of the weather by going to the Reader Comments section NCL by clicking here.

And finally before getting into the weather, I want to say thanks to Elizabeth Fread at www.wildponytales.com. Elizabeth found our NCL site over the weekend after searching and finding our Weekend Weather post where Jeff Stone had submitted that great photo of The Chincoteague Ponies @ Assateague Island in the National Park. Elizabeth has started a great site in her middle school that highlights the ponies. She wrote us a very nice e-mail over the weekend and we promised her that we’d highlight her site here today. Check it out at the link above in the beginning of this paragraph. Excellent site!

Ok let’s wade off into the weather folks! What a beautiful weekend! Lower temperatures and lower humidities! Some folks even managed to pull out a bit of rain Sunday night. For the most part, weekend temperatures were in the low and mid 80’s Saturday and around 90 Sunday for the valley. On the mountains along the BRP they had a very pleasant 75Â° high Saturday and the lower 80’s on Sunday.

We’ll have fair chances for showers & thunderstorms through mid week as a frontal boundary hangs around the area with disturbances riding along that front. Some of the rain totals could be more than we have seen in a long time, upwards of two inches locally. But…don’t get overly excited, not everyone will get a blanket rainfall, some none, but the chances are a bit better this time around than the past month or so. I don’t see any real organized severe weather out there, but can totally rule it out. By mid-week chances for rain diminish and temperatures warm into the 90’s once again.

Right now Hurricane Dean continues westward in the gulf as it heads toward the after slamming Jamaica Sunday. Again, Unless something crazy happens this storm will not affect us. But like I say, it’s why it’s called a prediction! Stranger things have happened, but it looks to be headed way away at this point.

A frontal boundary remains almost stationary to the north today with a slow sagging motion to the south. This will provide chances for scattered showers and storms.
Current-Sat Surface Map

The National Forecast Map has the front sagging southward while a series of disturbances ride along the front triggering showers and thunderstorms. The front eventually washes out by Wednesday night and Thursday allowing humid air and hot conditions to return.
Today’s Forecast Map

Local forecast
*Monday Partly sunny. Scattered thunderstorms across 50% of the area.
*High temps in Roseland, Lovingston & Greeenwood around 90Â°
*On the mountains above 2000 feet along the BRP, Wintergreen, Three Ridges, Devil’s Knob, and Love, Partly to mostly cloudy with scattered thunderstorms.
Highs top out around 79Â°
Winds W 5-10 MPH

Remainder of the week Look for partly sunny skies continuing on Wednesday with scattered thunderstorms, diminishing by late evening. Highs around 90Â°. The remainder of the week looks to be hot with minimal chances for rain and high temps in the low 90’s valley and low to mid 80’s mountains.