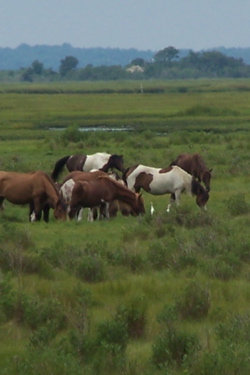 What a great shot Jeff Stone of Wintergreen Winery in Beech Grove captured while on the Eastern Shore. No it’s not Nelson, but we always enjoy a great scene like this, and Jeff is Nelson, so there!

Whew, Thursday was a hot one, really hot. We cracked the 100 degree mark again hitting 102 here at the office in Greenfield. Many of the NCL-Weathernet stations hit 100 before the day was over. They even made it near 90 upon Devil’s Knob as well. Today will be warm but not the 100 + temps and this weekend will be much nicer with lower humidity. Chances for rain diminish over the weekend, returning again by late Sunday night and the first of the week.

Speaking of rain, we didn’t see much across the immediate area last night. Though severe weather did break out like we predicted in Thursday’s forecast. Major damage occurred just up I-64 toward Goochland and Louisa, as far east as Richmond. Many power lines and trees are down in some areas. – I can’t rule out some random thunderstorm activity today, but better chances will be south toward Piney River and Amherst. You can see the severe weather outline has shifted slightly south and east on Friday’s map.

The latest on Hurricane Dean. He continues to move westward in the Atlantic as it heads toward the gulf. Again, I am not concerned over this storm yet, let’s see what he does by Sunday. If there is any motion toward the mainland U.S. I will have a special update over the weekend. I don’t see this making any considerable change in direction before then.

On the current surface map, a cold front continues to work through the area today. Scattered thunderstorms will still be possible but more likely later in the day to the south.
Current-Sat Surface Map

On the National Forecast Map, the front works toward the south, stalls for the weekend then moves back over the area as a warm front by the end of the weekend. Cooler high pressure will control the weather over the weekend.
Today’s Forecast Map

Remainder of the weekend Partly sunny on Sunday still cooler with highs on around 82 in the valley and 71 on the mountains. Showers and thunderstorms return to the forecast by Sunday evening and night. They continue on Monday under mostly cloudy skies and temps in the mid and upper 80’s.