The troop made it back to Nelson County approximately at 8:45pm. They had one minor delay with layover in Chicago (their flight would be departing 1 hour later than scheduled). Everyone is glad to be back home and as you can guess the boys were still talking about food-what to eat next!

The guys made it and we’ve got some new pics from Heidi late Saturday night. She’s done a great job of keeping us updated on their progress. So in her own words here’s the latest with recent pics!

“The troop got their wish this morning and had that hearty breakfast they had been dreaming about. Easy hike out of the â€œWindsâ€ with many stories to tell when they get back home. The troop then headed from Pinedale back to Jackson Hole to clean up and visit the town this afternoon. They are flying back on Sunday and I know everyone is crossing their fingers along with prayers that all goes well.” 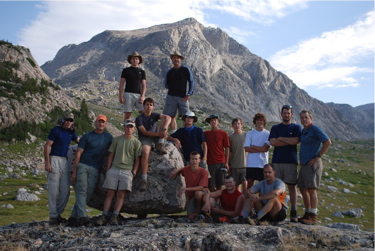 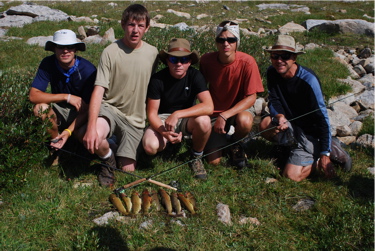 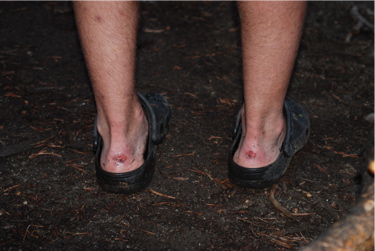 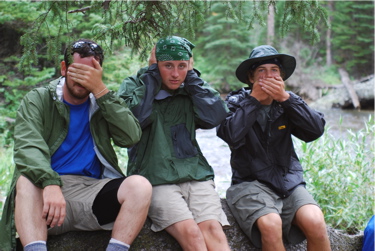 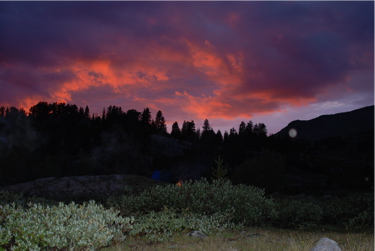 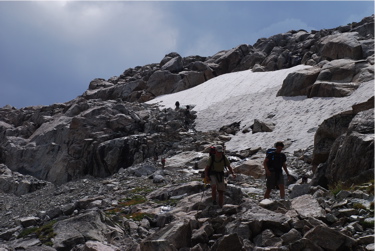 Going across country in Indian County. Hiking through snow pack. 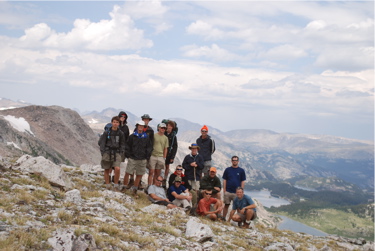 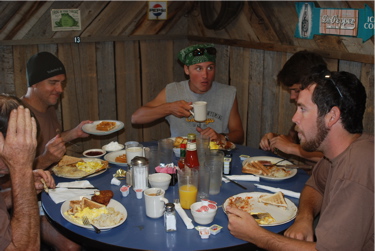 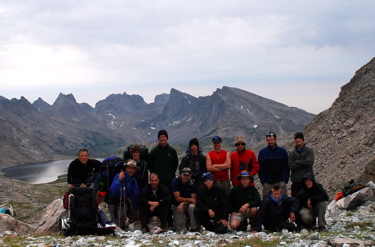 If all goes well the guys will be on their way back today. Have a safe trip and see you back here in Nelson!
-NCL-

Scoutmaster Steve Crandall called in Friday night to say it rained in the middle of the night while they were sleeping. It was overcast this morning so the troop laid low for a few more hours. The troop finally headed out and during the morning, the rain came once again. Stopping for lunch must have been the blessed moment for the skies cleared and the sun came out. They are camping at Boulder Creek on their last night in the â€œWindsâ€. Big cliffs are surrounding the lake. Onto the latest fish report: the troop fished all day catching small trout and big trout. They cooked up more trout for dinner tonight, the meals have been great! The troop already is talking about doing this hike again next year just so they can fish. The backpacks are light with 3 miles left of the journey. The troop wants to skip eating tomorrow morning rising at 6am to run to the vans awaiting them. Steve says all the troop is talking about is what they kind of breakfast they are going to eat on Saturday!

Report from the field – “The troop hiked 10 miles making up for lost time at the start of the trip (12 hour delay at airport) Every day has been â€œTrout Dayâ€, but this day was special for everyone. The troop were fishing maniacs the entire 10 miles â€“catching and releasing well over 100 fish. If you know the history of this troop, whenever they decide to go camping or backpacking it always rains. Itâ€™s true! Just as they settled into camp while pitching tents at Vera Lake, another intense storm hits soaking everyone. Wyoming is in a drought-go figure the rains would come this week. The troop hopes to hike to a point along a river where they will camp Friday night and then come out mid morning on Saturday. Scoutmaster Steve Crandall says the boys are talking about what they want to eat for breakfast if they get out early. If not, then they are deciding what to eat for lunch.”

Scoutmaster, Steve Crandall called in early today-a storm moved in late last night so the troop is bunkered down in their tents this afternoon. They hike over the divide with heavy rains and 25mph winds blowing-pretty crazy. They went through Photo Pass on the Continental Divide coming out through the Indian Reservation. Everyone is having a great time, but no on took a bath-too cold today! James Critz said the troop hiked straight up a rock slide for about 1 mile (1500ft). James says the Middlefork lake(10,250 ft) is amazing where they are camping, you have these huge stone peaks on one side and than on the other side is low rolling hills. James says it is really cool to look back from where you started each day and see how far you have gone-all the passes and mountains. I got a second call from Steve as the whole troop is trying to stay dry with heavy rains-everyone in tents. The troop noticed that Assistant scout master John Eggleston and Houston Roberts were no where to be found-thankfully they were following the buddy system. Well, if you know those two, guess where they were. Fishing and fishing, they each came back with enough fish to sell at a fish market.. It was enough to prompt Daniel out of his tent with fishing pole in tow despite the storm! We hope to post some pictures late Saturday when the troop is slated to come off the trail.

Tuesday, hiked approximately 6 miles brutal uphill and cross country, ended up taking a wrong turn which ended on edge of cliff with some snow, but managed to get back on track finally making camp near the Continental Divide (11,000ft). Crazy fish catching-the troop dined on fresh fish cooked by Assistant Scoutmaster John Eggleston while sitting on the high pass (west side of the Continental Divide). Life is sweet! The troop has dubbed John Eggleston â€œCookieâ€. He is the master cook of the fish with his small frying pan, a little olive oil, and some seasoning. Finally have seen some Big Horn Sheep in the distance , heard Coyotes howling and have seen Elk sign, but not a visual yet. The troop was able to see where they must hike on Wednesday â€“pure granite rock cliffs. The good news is after hump day, it is all downhill. Marshall Saunders thought the day was awesome as they sat high on the pass eating fresh fish (caught about 20). He said the views were awesome of the Indian reservation!

“Communication was tough tonight with the satellite phone-3 calls made and each time disconnected. Justin Crandall reported today was a brutal hike! Approximately 8 miles uphill on rocky terrain-another 1800ft, elevation at 11,000ft. Justin says they are camping in Europe Canyon with 360 views of the Rocky Mountains next to a lake with a great stream for â€œmore fishingâ€. â€˜Nothing like a cold shower to revive Justinâ€ he said. Assistant scout master John Eggleston stated he was whooped! All those rocks and pines. He felt privileged to be in Godâ€™s county. However, John misses Nelson County. John says taking a shower in the stream was tough as the water was soooooooo cold, he could not take it! Assistant scoutmaster Bennett Saunders thinks the hike is easy as he chuckled on the phone. By 3pm everyone was sleeping on their roll outs, no one could stand up straight. Personally, I think everyone is still making up for lost time at the airport. I hope to hear from them tomorrow.”

“Heard from Troop 32 via satellite phone Sunday night. The troop drove to Pinedale, Wyoming entering the â€œWindsâ€ around noon. They hiked approximately 6 miles to Ethel Lake at 8700ft.tough hiking as the troop climbed 1600ft from their starting point. The boys were in fairly good shape carrying packs of 35lbs to 55lbs. Once settling into camp, tents were pitched only to learn that two scouts were missing an important element(tent poles). No fear being boys scouts, the two of them erected the tent with spare parts and it is reported to be barely standing. They cooked up a meal of fresh fish and stove top stuffing along with chicken chunks. One meal per day (dinner) is a group meal. Enough food was purchased for dinner each night prior to leaving on the hike. It then was divided, weighed, and distributed between the troop to carry individually. The scouts hope to hike to an elevation of 11,000ft on Monday (approximately another 1700ft).”

NCL Updates 7-29-07 12:08 AM EDT
We’ve been telling you about the woes of Boy Scout Troop 32 from Nelson County trying to get to Wyoming for their hike. (See all of the previous posts below to catch up) Good news late Saturday night. Heidi Crandall sent us an update and at least some of them have made it there, I am not sure from her e-mail if all, but sounds like they are all making their way there. She sent some updated photos and a bit about what’s going on. We’ll let you know more as we know!

“These may be the only pictures until they come back off the trail. Transmission will only be by satellite if possible.” 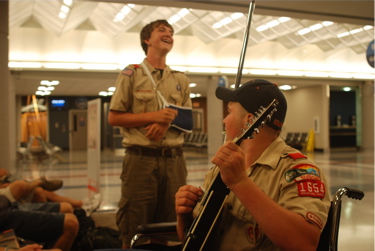 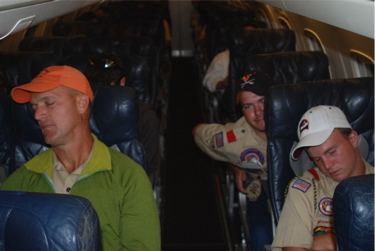 The troop finally on board the plane to Chicago in the wee hours of the morning. Troop leader assistant, Tom Saunders, and scout, Marshall Saunders, catching some shut eye. 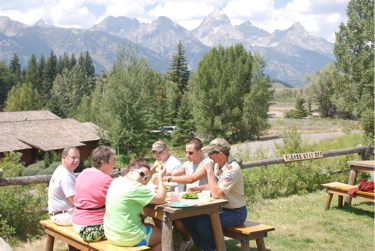 The troop eating lunch in Jackson Hole with the Teton Mountains in the background. 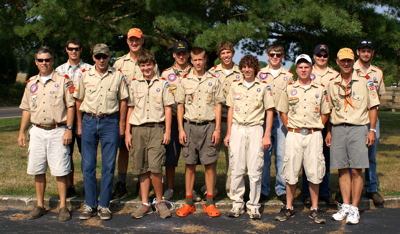 This is Troop 32 Friday morning at the Rose Baptist Church heading out to the Wind River Range in Wyoming to backpack for 8 days. Heidi Crandall is keeping us updated on their progress. Steve, her husband far left in above photo, is one of the scout leaders on the trip.
Photo by Heidi Crandall
For Nelson County Life Magazine : Copyright 2007
Nelson County, Virginia

“They all got seats on the plan this morning which was delayed again, but Troop 32 is boarding as I write this all 16 of them. Houston â€“all systems a go! I might get some pictures later today or tomorrow before they head out. I will be getting field reports from Steve via satellite phone.”

“Steve and crew are waiting to get out this morning, 3 of them are on standby, They did not get out until 12:30am getting to Chicago at 2am. I am hoping they all make it on the plane this morning. My understanding is the passengers got pretty friendly after 12 hours in the airport, wheelchair races in the corridor late into the night.”

Their first 24 hours haven’t been the smoothest as far as getting out to Wyoming. Last night she updated us in this e-mail:

7-27-07 3:51 PM EDT :
The boys scouts are stuck at Richmond Airport-flight delayed again and again. Hope to fly out late tonight and have to wait until Saturday morning with half the group leaving in am and the other half leaving in the afternoon. Backpacking delayed until Sunday. Heidi

We’ll be updating their trip along the way so check back for updates!