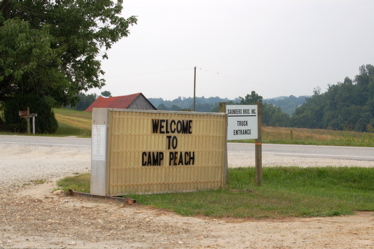 Above, Taylor Smack, far left, (Brewer & co-owner) his wife Mandi Smack, (Marketing Director and Co-owner) & Matt Nucci, (Operations Manager and Co-owner) stand in front of the newly finished fireplace in the tasting room of Blue Mountain Brewery & Hop Farm in Afton. I am pretty sure they won’t need the fireplace anytime this week! But it’s going to be nice this winter!

It was a quiet Monday morning, but as we predicted, it turned stormy in the afternoon with daytime heating. Today will be similar to Monday, but I predict the chances for severe storms are a less today than Monday as weak high pressure briefly takes over. Can’t rule out a strong storm developing, but it won’t be as organized as Monday.

Speaking of storms Monday, Taylor Smack in the picture above, far left, told me it rained like crazy in Afton right at the Nelson / Albermarle line on 151, at least an inch or two! As luck would have it, we got nothing here in Greenfield. But some of the other NCL-Weathernet Stations did pick up some precip. You’ll see the totals below. Taylor tells me, they are working hard to get Nelson’s first micro brewery open. He says to look for a frosty mug on the bar in the fall just in time for the leaves to change color …. give or take a week! Look for many more details and pictures about what’s happening at Blue Mountain Brewery in Afton in the August issue of Nelson County Life Magazine, out on stands the last week of this month!

Here’s the numbers from Monday:

The current surface map shows a stationary front to the north, high pressure south keeping t-storms and humid conditions in the forecast, though fewer storms today than Monday. Wednesday and Thursday look to be the more interesting days right now for severe weather. More on that below.
Current-Sat Surface Map

The National Forecast Map, shows the front staying in our area, but it a bit more northern today so chances for storms less. It will still be hot, but not quite as humid as yesterday, though it’s hard to tell the difference when you’re in the lower 90’s!
Today’s Forecast Map

Local forecast
*Today Partly sunny this morning, high clouds moving across the area later in the day. Hot with isolated afternoon thunderstorms across 20% of the area.
*High temps in Afton, Colleen, and Schuyler 93 degrees.
*On the mountains above 2000 feet along the BRP, Wintergreen, Three Ridges, Devil’s Knob, and Love, Partly sunny in the morning with partly cloudy skies in the afternoon. Warm with afternoon isolated thunderstorms.
Highs top out around 84 degrees.
Winds W-5 MPH becoming SW in the afternoon.

*Tonight Mostly cloudy with isolated thunderstorms in the evening, ending by midnight. Patchy fog in any areas that get rain.
*Lows valley around 66 degrees.
*On the mountains overnight low of 64.
*Winds SW-5 MPH.

*In the extended outlook
Wednesday Mostly cloudy, and much more humid with scattered to numerous afternoon thunderstorms.

Storms Wednesday afternoon have the chance to become severe. Some of the dynamics support an isolated tornado or two as referenced in this morning’s NWS hazardous weather outlook.

DAYS TWO THROUGH SEVEN…WEDNESDAY THROUGH MONDAY

SEVERE THUNDERSTORMS ARE POSSIBLE BOTH WEDNESDAY AND THURSDAY. AN
ISOLATED TORNADO IS POSSIBLE ON WEDNESDAY. THE GREATEST CHANCE FOR
SEVERE WEATHER IS BETWEEN 2 PM AND 8 PM EACH DAY.

The remainder of the week looks partly cloudy with chances for scattered afternoon thunderstorms each day through Friday night when a cold front finally pushes through the area. Afternoon highs cooling to the mid & upper 80’s by week’s end. Next weekend still looks sunny & cooler with temps falling to the low 80’s valley / around 74 mountains.