Hello to Nelson County from Israel! For those of you who donâ€™t know me, my name is Jennie Tal. My parents moved to Nelson about a year and a half ago and run the Mark Addy in Nellysford. I am a very recent Virginia Tech graduate and due to the fact that I have no money and no job (Iâ€™m taking suggestions!) Iâ€™m on a six-week world-traveling vacation. Sucks to be me, right?

After my 10 day Birthright trip (Check out my last journal entry!) I spent 10 days in Israel chilling out max and relaxing all cool. Basically, I shopped and hung out on the beach for 10 days. It was pretty cool, but not too interesting to read about. So instead of boring you with a list of purchased items or day by day pictures comparing my tans, I will write a little bit about the culture of Israel today. 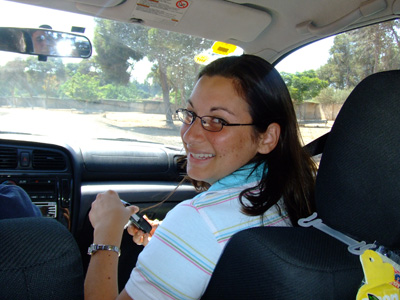 Here I am! My name is Jennie and Iâ€™ll be your tour guide today!

Thanks to Ben for helping me by asking so many questions and giving me a starting point!!!

Even though I came to Israel with a lot of young people looking for a good time, it is impossible to experience the country without at least acknowledging the history. A lot of it is religious, mostly focusing around Judaism, Christianity and Islam, but some of the places around the country are thousands and thousands of years old- how can that not be interesting? Most of the oldest buildings and stories come from Jerusalem. 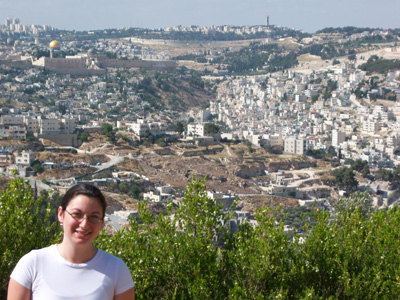 Even though many religions are more than present, Judaism is definitely the predominate religion, and everyone takes that into consideration. There are certain places you have to cover your head (for males) and wear conservative clothing, it is a very religious city.

Behind me you can see all kinds of history. Jerusalem is a walled city, you can see that wall plus a new wall built between Israel and Palestine over the last few years. You can also see the Dome of the Rock behind my right shoulder.

To contrast, there is Eilat, a very touristy city in the southern part of Israel with gorgeous beaches. It also has flea markets (bargain!) with all kinds of homemade and not-so-hand made goods from around the country and the world. Itâ€™s a great place to hang out for young people, but I wouldnâ€™t stay there more than a few days, unless youâ€™re OK with beaching it the whole time.

The real hotspot, though, is Tel Aviv. Even though Jerusalem is the official capital of Israel, Tel Aviv is the social, cultural, financial, and governmental center of the country. Oh, and it has spectacular beaches and shopping. 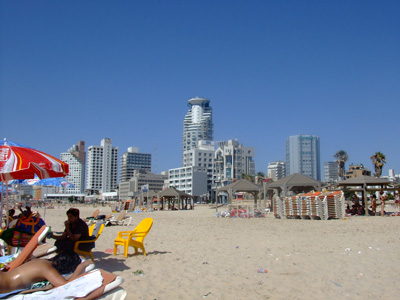 Even though Tel Aviv is predominantly secular, especially as compared to Jerusalem, people are still aware of religion. While I was in Tel Aviv eating out at a nice Italian restaurant, the hostess explained to us that the food served would not be kosher as she sat us, just so weâ€™d know.

When in Tel Aviv, the Carmel Market is something you canâ€™t miss. Like Eilat, it has all the handmade crafts, but it also has various food items- namely fruits, vegetables, spices and bread. On Tuesdays and Fridays, there is an adjacent street, Nachalat Binyamin, that hosts a spectacular array of artwork from local artists trying to sell their work. A must-see.

Well Iâ€™ve been in Europe for the last week or so. I need to get my rest so I can gallivant through Paris tomorrow.

Youâ€™ll be hearing from me soon!