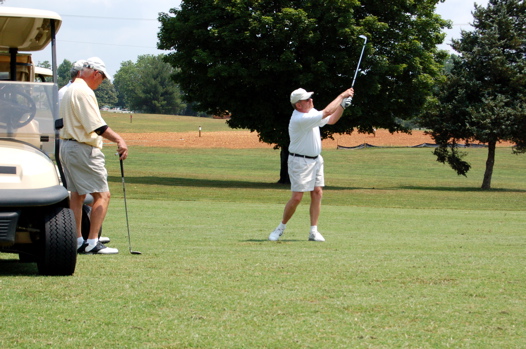 Monday was a near perfect day. A great day for the Nelson Habitat for Humanity Golf Tourney at Winton Country Club in Amherst County. These guys and gals played on a beautiful course with beautiful weather. Check out more photos later today from the tourney. I’ll post them in their own category along with scores once we have them.

Scattered thunderstorms developed yesterday afternoon with many folks in Nelson seeing lots of rain, others none. On my way back from Amherst I rain into pretty heavy rain around Brent’s Gap then ran out of it Valley Green Shopping Center in Nellysford. Here at NCL-Nelson County Life Magazine in Greenfield we didn’t get a drop. It was mild with an afternoon high of 85 degrees. Upon on the mountain at NCL-Wintergreen Nature Fountadion @ Devil’s Knob, the rain gauge there was empty as well, with an afternoon high of 79 degrees. But if you go to the far SE part of the county in Arrington, Mike Patterson’s NCL-Mini-Tara Vineyards picked up nearly a one a a half inches of rain at 1.45″ with an afternoon high of 84 degrees. You can view other rain totals across the county here.

We’ve had several stations go offline over the past 24 to 48 hours due to lightning strikes, and are working to get them back up soon. NCL-Wintergreen Winery is a computer problem at their place and as soon as it’s resolved they will be back up. NCl-Delfosse Winery appears to be a lightning strike to their computer. NCL-Tiger Fuel is back up and running normally.

On the current surface map below, high pressure to the north remains in control of our weather with scattered thunderstorms again a possibility this afternoon, tonight and tomorrow.
Current-Sat Surface Map

On the National Forecast Map, several upper level disturbances will move through over the next 36 hours combined with lots of low level moisture being spun in from a low off of the New England coast. There is a chance some of the storms could become severe again like a few did on Monday.
Today’s Forecast Map

*Today Mostly sunny this morning, with partly cloudy skies this afternoon. Scattered heavy thunderstorms possible in about 20% of the area by afternoon. They increase a bit by evening.
*High temps in Amherst, Pinery River and Faber 88 degrees.
*On the mountains above 2000 feet along the BRP, Wintergreen, Three Ridges, Devil’s Knob, and Montebello, partly cloudy with scattered thunderstorms late afternoon. Highs top out around 74 degrees. Winds NE 5-10. Gusty near any thunderstorms that form.

*Tonight scattered thunderstorms over 40% of the area, decreasing after midnight, patchy fog in areas where it rains.
*Lows valley 58 degrees.
*On the mountains overnight lows of about 61.
*Winds N 5-10 MPH.
https://www.blueridgelife.com/wp-admin/post.php?action=edit&post=505
*In the extended outlook
Thursday partly sunny. High 77 valley – 68 on mountains.
Friday mostly sunny. Highs 76 valley around 70 mountains. Overnight lows generally in the low 50’s valley, upper 40’s mountains by Friday night. The weekend looks generally dry with partly to mostly sunny with temps in the mid 80’s Sat to near 90 by Sunday.