Current local satellite shows thin overcast continuing to hang in the area due to weak trough in the area. Dewpoints are going up as well with some thunderstorms developing on local radar to the west of the BRP. A scattered t-storm may work it’s way in late this evening. Noting major. Rest of forecast is on track.
-T-

Previous early morning post below:
Good Wednesday. It’s hump day, all down hill from here as the saying goes!

Check out this beautiful photo our NCL Photographer Paul Purpura got yesterday, of all places, on his way to take out the trash! Used his superduper macro lens for this one! But this is a great shot up at Wintergreen, taken at Three Ridges Condos. There are so many pretty trees & flowers blooming right now. Thanks Paul! 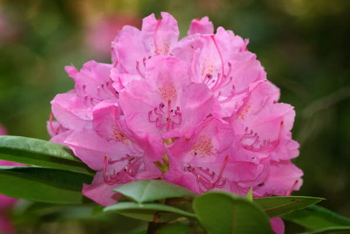 An even closer view, that must be some lens Paul! 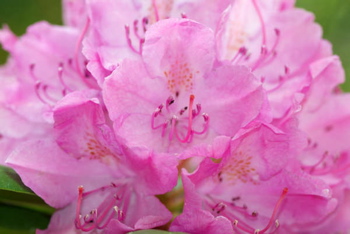 Tuesday was another nice day, though a bit cloudy from time to time. Yvette played tennis Tuesday morning then later we hung out at Basic Necessities with Sarah, Arlene and Kay. Later we ate at D’Ambolas with Phil. We finished uploading the June issue of NCL to the printer late Monday, so Tuesday was a well deserved rest day! If the planets line up just right, the new issue will arrive this weekend. We’ll see, don’t want to jinx it!

Yesterday topped out in the upper 70’s and low 80’s again across the area. Here at NCL-Nelson County Life Magazine we reached a pleasant high of 80 degrees yesterday. Upon the mountain at NCL-Wintergreen Nature Foundation they reached an afternoon high of a cooler 69 degrees. To our east in Lovingston at NCL-Tiger Fuel they reached a Monday high of 79 degrees. Up Route 29 in Hickory Creek in Faber, Claude at NCL-Delfosse Winery reported an afternoon high of a 78 degrees. Back SE at NCL-Mini Tara Vineyards in Arrington, Mike Patterson’s station there showed a high of 78. The station over at Wintergreen Winery in Beech Grove has been offline a couple of days so I can’t get data from there to see what the highs were. Going to check into that later today. Bet Jeff is covered up right now. They’ve been bottling wine, and are again today.

Today’s current map below shows the south end of a warm front (that red thing with little humps) stretched across West Virginia. We will warm up a little more today but the big warm up comes after today into the weekend. High pressure to our NE will start building in today givng us lots of sun and warming temps as the day wears on.
Current-Sat Surface Map

On the forecast map, that warm front moves north, high pressure continues to take control off of the New England coast today. It will control our weather through the remainder of the week. A weak trough will be present across Virginia today, so with that around scattered thunderstorms are possible. Though the bulk of them will be west of the BRP.
Today’s Forecast Map

Today look for partly sunny skies and that very slight chance of a scattered afternoon thunderstorm. The humidity will begin increasing today and throughout the week, so it will begin feeling a little more sticky out there. High temps in Tyro, Schuyler, and Roseland will be around 79 to 80 degrees. On the mountains at Afton, along the BRP, Wintergreen & Humpback Rocks, look for afternoon highs to top out around 72 degrees. Winds will be SE @ 5-10 MPH Tonight skies clear affter any scattered tstorms die out. Lows valley in the low 50’s – mountains about 50 degrees. Winds will be south about 5 MPH becoming light and variable later in the night.

Tomorrow look for mostly sunny skies and temps warming to the low and mid 80’s valley and around 75 mountains.

The rest of the week warms up with daytime highs in the mid 80’s and lows around 60. The next chance for any real thundershowers still looks to be Memorial Day (next Monday) The upcoming holiday weekend looks great with partly cloudy skies and temps in the mid 80’s An isolated thunderstorm can’t be ruled out, but most of the dynamics won’t be there with lots of high pressure in place.

Have a great Wednesday!
Tommy